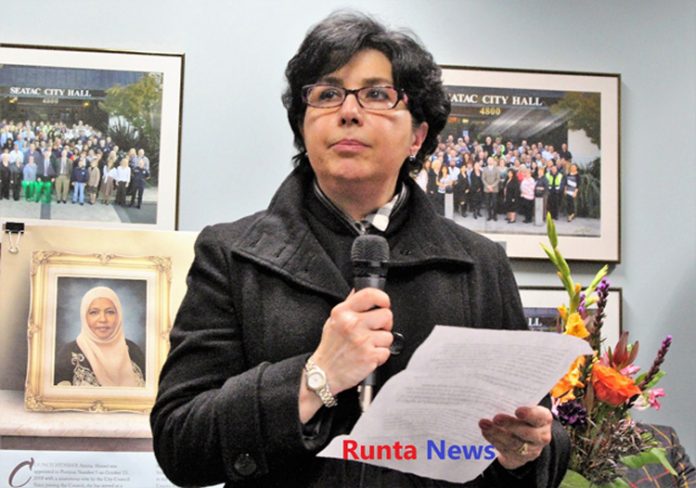 Someireh Amirfaiz spoke emotionally at the vigil. She was long time friend to Amina and her boss at Rewa where Amina spent most of her career.

Dozens of politicians, activists, advocates, and community organizers gathered on Tuesday evening at SeaTac City Hall in honor of Amina Ahmed who had served in the City as the first Somali Muslim Council Member. The people gathered there we included some who have closely related to Amina whether in work places or community relationships.  Someireh Amirfaiz now the Executive Director of Atlantic Street Center, a non-profit organization that serves immigrants spoke highly of Amina who she has known over 20 years. Someireh said, “I have first hired Amina in my capacity as the Executive Director of Refugee Women’s Alliance ReWA and since have learned a lot about her”. In her short commemoration speech Someireh asked herself with a heavy heart and deep pain in her soul, “what did Amina Ahmed died for? What was the meaning and purpose of her life?” “Amina was everyone’s mom and sister and we have often talked about how to be a human” She added. “Our Amina knows that she is loved, therefore, she will always be” Someireh concluded her speech.

Abdirahman Hashi aka Garaar a long time friend and who worked with Amina at ReWA asked SeaTac City to honor and retain Ahmed’s legacy by naming her one of their centers or streets. One of the things he suggested was changing the name of Highway 99 which runs through the heart of SeaTac into Amina Ahmed International Boulevard.

The hall was packed with activists some of whom used the event as a political stage to  portray themselves as the fighters for the community while the true friends of Amina were sidelined and left to listen the speeches in the hall ways.

Amina Ahmed, who was a well-known among communities in Seattle area was picked just less than two months ago to became the first Somali Muslim Woman elected official in the State of Washington. She was unexpectedly killed in a car crash at age 52 on Saturday December 8. According to sources, Amina died on the scene around 1pm. Members of the community are morning and feeling sad about the great loss. According to the SeaTac Blog, Mayor Erin Sitterley and the City of SeaTac colleagues and Staff are also mourning about the loss of the newly appointed City Council-woman Ahmed, who passed away as the result of injuries suffered during a fatal auto collision.

Tukwila Council Member, Zak Idan who last year became the first Somali was elected told Runta News that he had a phone conversation just couple of hours before the crash. When we spoke over the phone his voice was so low and seemed startled with fear. He told us that he was in state of shock and disbelieve.

Chief Editor of Runta News, Mohamud Yussuf, who have known Amina since he arrived Seattle 1996 described her as courageous advocate who have never backed off and always spoke for the community with a sincere voice. “She was a symbol of community” he added. Satwinder Kaur, a City Council Member of Kent, Washington posted in her facebook page after receiving the sad news this message, “We lost a trailblazing woman, a fearless leader in SKC. My friend and newly appointed SeaTac City Councilmember Amina Ahmed was taken from us in a car accident. She was an amazing leader, always fighting for all of us. You will be missed, my sister. May you Rest In Peace. Inaa lilaah waa inaa Ileyhi raajicuun Allaha u naxariito ameen.”

On Monday hundreds of people came together for Amina Ahmed’s funeral services. Among those who came was Washington State Governor Jay Inslee who is also a candidate for US President 2020. Mayors and Senators and Council Members were among those who participated the Janazah Prayer at Abubakr Mosque. 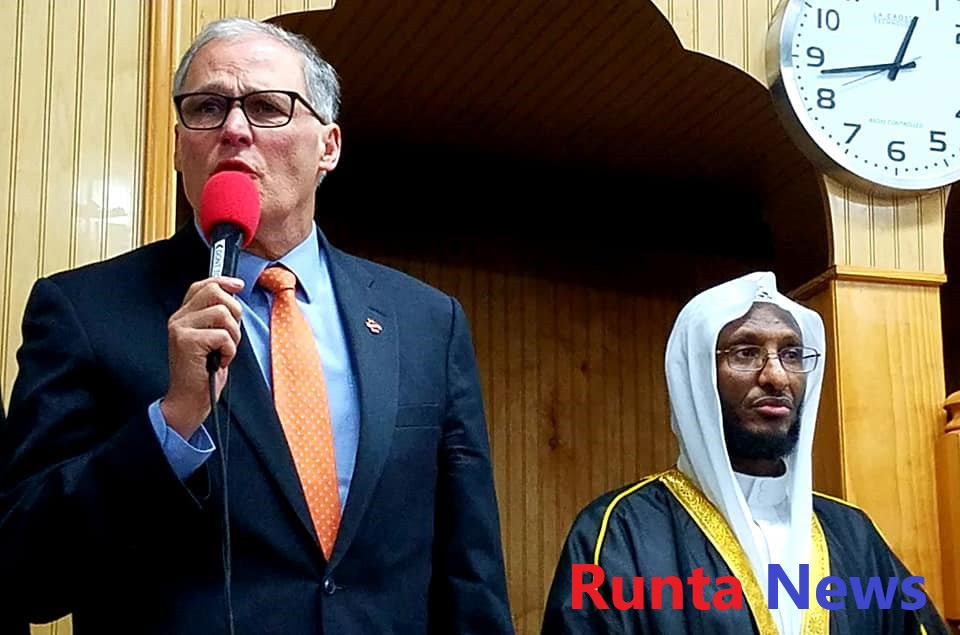 Washington State Governor Jay Inslee speaking at the funeral services in Abubakr Mosque with Sheikh Ahmed Noor, the Imam of the Mosque by his side

Amina have worked many years for Refugee Woman Alliance (ReWA) where she had advocated and serviced for woman especially Somalis in Seattle area. She was the backbone of the organization and had helped build from the scratch until it has become one of the biggest organizations in Washington State with many buildings and branches in different neighborhoods or cities. 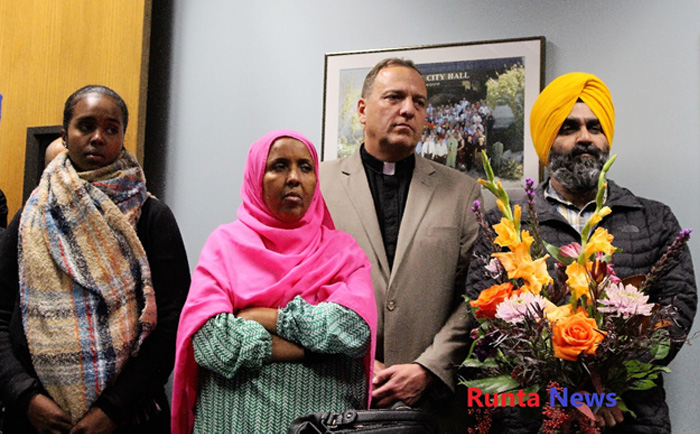 Last few years, Amina has been the Executive Director of a newly found organization called Partnership in Employment (PIE) which is a 501(c)3 non-profit organization that aims to address the challenges of employment among Washington foreign-born populations. Thanks to the hard work of their diverse faculty, and philanthropic efforts of their donors that enable them to create liveable wage employment opportunities for immigrants and refugees in Washington State. PIE provides in-language, culturally-competent program designs that responsively support the goals of each client to build sustainable self-reliance in the immigrant and refugee community. 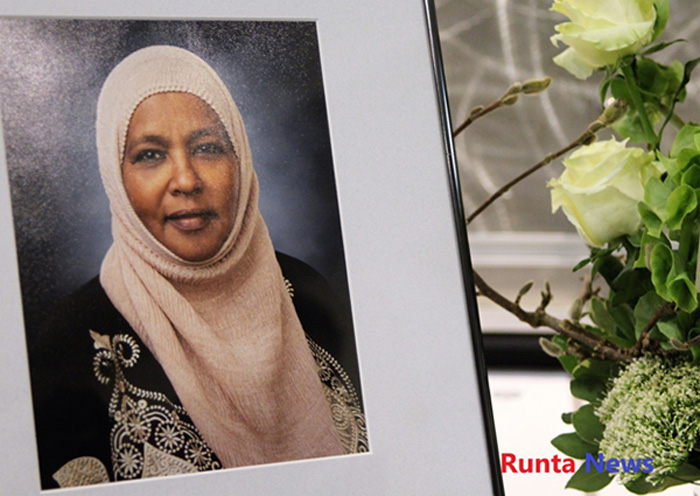 Amina’s sudden departure will surely be felt many years to come among many communities across the state, especially within the Somalis for whom she belonged and closely connected. She was survived by two young adults, a daughter and a son. On behalf of Runta’s staff and board of directors, we send our condolences to all members.