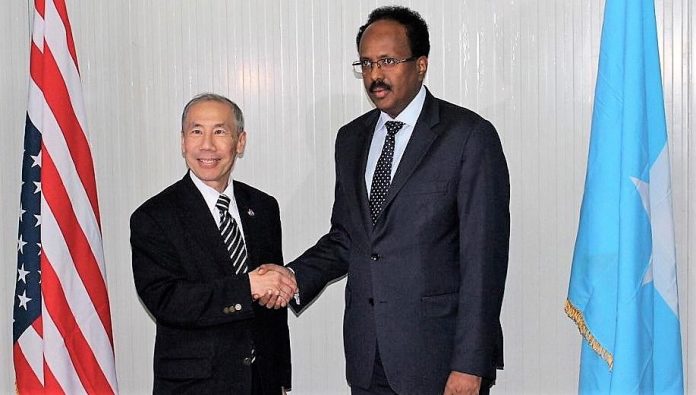 A statement issued by the US Ambassador to Somalia, Ambassador Donald Yamamoto announces that the U.S Government offers Somalia its single biggest investment so far. The Statement which was issued yesterday was written as,

“The United States re-established permanent diplomatic presence in Mogadishu, Somalia on December 2, 2018.  USAID also re-established presence.  To create a better tomorrow for the people of Somalia, the United States is committed to providing more than $900 million in critical investment.  The United States is meeting life-saving humanitarian assistance needs; expanding education and healthcare; building institutions, good governance, and justice; creating jobs and advancing economic development; and providing stabilization and security for the people of Somalia.

$420 million in life-saving humanitarian assistance to Somalia this year.

Creating more than 1,600 full-time, private sector jobs in the last 3 years.  (In the dairy sector alone, our support created nearly 500 full-time and 650 seasonal jobs.  We helped stop Irmaan Dairy from closing down; it now produces over 3,500 liters of milk daily.)

The United States is looking at airport and port upgrades to create trade and jobs.

Consideration of debt relief to attract development to Somalia.

This announcement comes at a critical time when the Somali government tries to establish itself as a peace partner in East Africa despite the internal challenges it faces. This news has also been delightfully welcomed by all Somalis especially to Somali Americans including President Mohamed A. Farmaajo who himself is a citizen from Buffalo, New York.

The US Ambassador to Somalia Donald Yamamoto, a Japanese American, have long been known among Somali Americans with whom he had established good relations during his role as the Assistant Secretary of State of African Affairs. He had served previously as the US Ambassador to Ethiopia and Djibouti which are neighbors to Somalia.