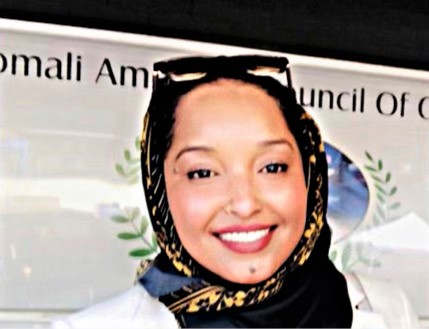 A press release Runta News received today from the Somali Youth and Family Club confirms the nomination of Ayan Warsame as the new Executive Director for the organization. After receiving the letter, we directly spoke with Ayan over the phone and she assured us the nomination which has been rumors in the past two weeks.

The official letter which was singed by the Chief Chair of Board of Directors, Burhan Hassan was written as follows, “We are pleased to announce Ayan Warsame as the new Executive Director of Somali Youth and Family Club.  Ayan has previously served as our Director of Advocacy and Legislation.

Along with her enthusiasm and passion, Ayan has a clear vision for the organization and is excited to establish a culture that will promote our work and mission.

As you may know, SYFC has gone through some changes recently.  We appreciate all our funders, partners, and clients for their patience during this period.  We look forward to strengthening our partnerships and to continue providing excellent programming under Ayan’s leadership. Please join us in welcoming Ayan Warsame in her new role!”

Ayan is the third woman who has become the Executive Director of this organization since its founding. The brief conversation we had with her over the phone this morning she said she will take this organization to a higher level and will restore its reputation it had in the community and the funders.

Runta was unable to get hold on Burhan Hassan, the Chair, of the organization for farther comments, but we heard some of the coworkers are expressing joy and anticipate smooth transition as the organization is expected to go under extensive reforms. Ayan is already reaching out to new talents to join her in building a new community owned organization.

Ayan is highly educated, charismatic, and eloquent. Members of the community hope she will steer the organization, which has lately been in turmoil, into the right direction.

Anti-Islamophobia “Roadshow,” asks Washingtonians to Act from Faith, not Fear