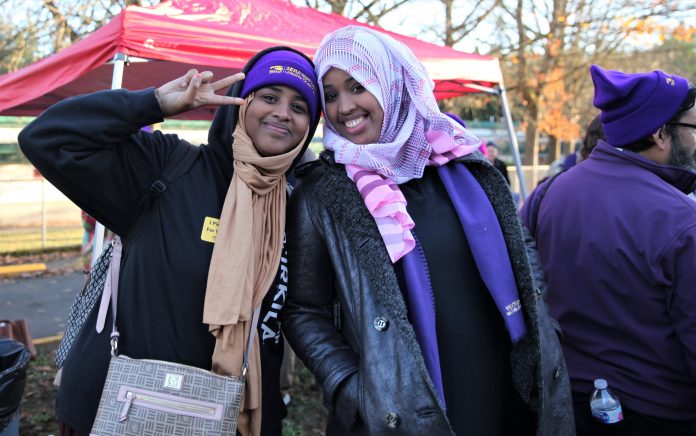 By Dave Bates for Runta News

Burien, WA- On Wednesday, November 20, hundreds of nurses and caregivers held a “Rally and Informational Picket for Quality Healthcare” at Highline Medical Center to raise alarms about severe understaffing, patient care concerns, proposed cuts to health benefits and other worsening crises at the hospital. Highline staff say that executives at CHI Franciscan, the large corporate owner of Highline, are prioritizing profits over the needs of patients. Problems have grown so grave at Highline that 327 nurses and caregivers have left the hospital since 2016.

“My co-workers and I are standing up for better patient care, better health benefits, better wages, and better ways to retain staff,” said Sara Moallin, a registered nurse in the family birth center and a mother of four, who came to the U.S. from Somalia when she was 13. “An important part of recruiting and retaining qualified staff is making sure that every worker is treated with respect and racial justice, so we’re also trying to achieve safeguards against discrimination in our contract.”

“I’ve been a nurse at Highline for 35 years – half my life – and I’ve watched it change from an independent community hospital to part of a major corporation which is only focused on acquisition and promotion,” said Marghee Baldridge, an emergency department registered nurse who holds a master’s degree in nursing. “I went into nursing because I have a deep commitment to helping people. But the staffing levels are unsafe at Highline, and it’s very hard to give patients the care they deserve. In the emergency department I’m often responsible for severely ill patients who require multiple time sensitive and complex interventions and there aren’t enough supportive services. It’s gotten so bad, we now have a revolving door because staff people are overwhelmed and feel they cannot provide safe care. When we ask for better staffing levels, executives say we have to meet our ‘productivity grids’ and it seems like they’re more concerned about profits than the safety and well-being of our patients. Meanwhile, CHI-Franciscan has ads running on TV during sports events and award shows – I wonder how much all that advertising costs?”

Approximately 550 registered nurses, certified nursing assistants, lab assistants, sterile processing techs, unit secretaries, environmental services workers, dietary aides and others have been trying to negotiate a fair union contract with urgent solutions since June. Rather than listening to their concerns, executives have refused to bargain in good faith and have instead committed unfair labor practices by eliminating nearly all the doctors in the workers’ health plan to try to force them into a worse corporate plan. Nurses and caregivers say it is a sad irony that executives are trying to cut healthcare for healthcare workers, which would be especially hard on lower-wage employees with children under their insurance.

“People who go into the healthcare profession are caregivers at heart,” said Tarabia Franklin, a registered nurse in the intensive care unit who has worked at Highline for five years. “But CHI Franciscan is asking us to keep giving and giving until we’re completely burned out. We can’t take our breaks, we don’t have the staff necessary to provide quality care and it’s overwhelming. In a hospital, you need to be sure not to make any mistakes because it could determine whether a person lives or dies. Executives are focusing solely on the bottom line, which isn’t conducive to a safe hospital setting. The powers that be are not at the bedside, they’re only seeing numbers not patients.”

“The staffing’s so bad at Highline, we feel like the wheels are coming off,” said Jenny Carter, a lead sterile processing tech who has worked at the hospital for 28 years. “In my area of sterile processing, we usually only have one person on duty per shift, which creates a bottleneck. We have to wash all the surgical instruments, then assemble them for surgeries, and there’s just not enough staff to get all the work done. Making matters worse, management’s proposed healthcare cuts are really going to hurt, especially co-workers who have children under their insurance. All these problems have created a mass exodus, with hundreds of workers leaving in recent years.”

In addition to the rally and informational picket, workers are raising awareness amongst elected officials and the public through other means, including: a mobile billboard which will be driving through major intersections in the Burien area and circling CHI Franciscan corporate headquarters in Tacoma; extensive social media posts using the hashtag #ProtectHighlinePatients; a website ProtectHighlinePatients.org which will allow community members to directly contact executives; leafleting to patients and the public; and distributing yard and window signs to neighbors.

CHI Franciscan is very financially healthy with $1.4 billion in revenue in 2018, and certainly has more than enough resources to improve staffing levels, protect patient safety and raise job standards. Recently, Catholic Health Initiatives (CHI) merged with Dignity Health to form CommonSpirit Health, the largest non-profit health system in the country by revenue, with over 700 facilities throughout 21 states. Highline workers want to hold corporate executives in distant boardrooms accountable and ensure they are investing in safe, quality healthcare and good jobs for the local community.