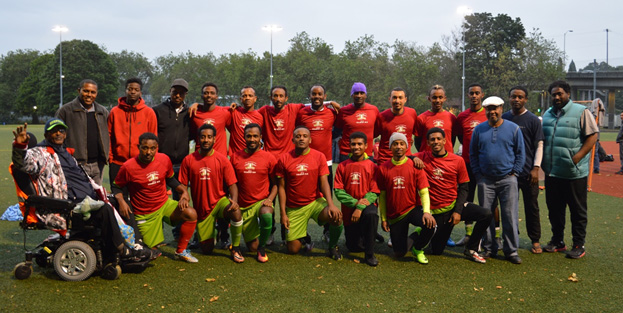 Team Ethiopia of the host city, Seattle, at one of their practicing games in George Town Field. Photo by Runta!

The Ethiopian Soccer Federation in North America (ESFNA) is hosting a soccer tournament in Seattle from July 2nd– 8th. The event is being held at Renton Memorial Stadium. The Seattle organizing committee led by Daniel Tezazu Kore, Tadiwos Melashu, Habtamu Abdi, Mulumebet Retta, Abiye Nurelegne, and others played a critical role in bringing the tournament back to Seattle, working tirelessly to achieve that goal.

We recently spoke with Daniel Kore who led this effort about the history of the tournament being held here in Seattle. Daniel informed us that after a 13 year hiatus, the ESFNA tournament is finally back in Seattle. He fondly remembers attending the last tournament held here in Seattle in 2004. He reports that the Ethiopian community in Seattle has missed the event tremendously. Kore reports that one of the main reasons for the delay in bringing the tournament back to Seattle is the high-priced hotel costs in the Emerald city. As an Ethiopian-American who has been a resident of Seattle for the past 18 years, Kore is especially thrilled to have the tournament back in Seattle which has one of largest Ethiopian communities in the United States. The ESFNA tournament requires heavy sponsorship given that they are responsible for the expenses of 32 teams which include food, transportation and lodging. Kore reports contacting multiple local companies asking for financial support to make the tournament a reality.

The second team which is representing the Ethiopian community. Both teams hope to keep the cup in Seattle

Although many companies were unable to contribute, UBER which has close ties to the African community in Seattle wrote a check for $100,000. Local African business owners also contributed $10,000 in support of this event. Although many local companies were unable to contribute for this year’s tournament the hope is, with the support garnered from the transportation giant the success of this year’s event will help secure funding for future events. UBER’s support of the ESFNA tournament helps dispel the thought that “diversity” and “inclusion” are just buzzwords which companies regurgitate as an attempt to placate the minority communities who may work for them or whom they serve as their customers.

The ESFNA tournament is expected to draw 32,000 spectators to the Emerald city which is expected to bring a lot of revenue to local business specifically Ethiopian owned businesses. The ticket prices are affordable at an average of $20 per ticket for adults, discounted rates for children while children under the age of 5 get free admission. This event promises to be fun for young people as well as for families in the area.

Seattle Baro and Dashen are not just an Ethiopian teams here in Seattle, they welcome players of non-Ethiopian descent to join their teams as well regardless of their race, culture or religious background. Tryouts are held once a year, the Seattle Baro team practices at Ingraham high school while Seattle Dashen holds their training at the Nathan Hale High School in Seattle, WA.

Seattle will be getting a treat on July 2nd -8th thanks to the tournament which promises to not only electrifying plays on the pitch but also a vast array of the Ethiopian food, culture and entertainment which Seattleites have grown so fond of. Tickets to the tournament can be purchased at http://www.esfna.net/seattle2017.

Mo Farah Makes History for Britain in the Olympics!