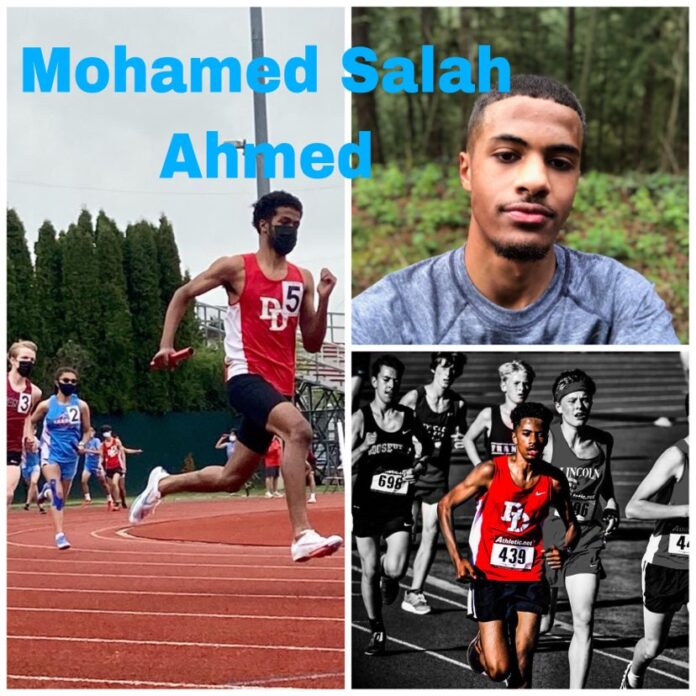 A new Somali star was born on Saturday in the United States of America. An 18-year-old Mohamed Salah Ahmed won yesterday the first place of the 800m Track Meet competition which 4 High School students in Portland, Oregon participated. Ahmed’s win comes while observing the fasting month of Ramadan. His grandfather, Said Amir, the older brother of the legendary famous artist and political cartoonist Amin Amir has just shared with us this great news with excitement. The 4 High Schools that participated this race are David Douglas, Clackamas, Barlow, and Gresham high school. Portland is the home or headquarter of Nike Company and all eyes are on this new star who may follow the footsteps of the best-known Somali world champion athletes and gold medalists, Abdi Bile and Mo Farah. Ahmed has already been offered many scholarships in and out of the state, but he finally settled with the Oregon State University to stay around with a whole family of uncles, aunts, cousins, and grannies who when combined can now form a small community in Portland.

Ahmed’s family led by his grandfather Said Amir settled in Portland in the year 2000 after fleeing from Somalia due to the civil war that erupted in that country early 1991. The Somali community in Portland has since grown big and they form the single largest ethnic from a Muslim or African ethnic group. Coincidentally, Portland is where the most famous Somali/British athlete, Mo Farah, takes training before major races. Farah, a two times Olympian Gold Medalist, has recently broken the 10,000-meter world record which was set by the Ethiopian athlete, Haile Gebrselassie in 2013. The Somalis of the United of America welcomed this amazing news, and feel they have no shortage of stars as they are move forward to prosper as a community.