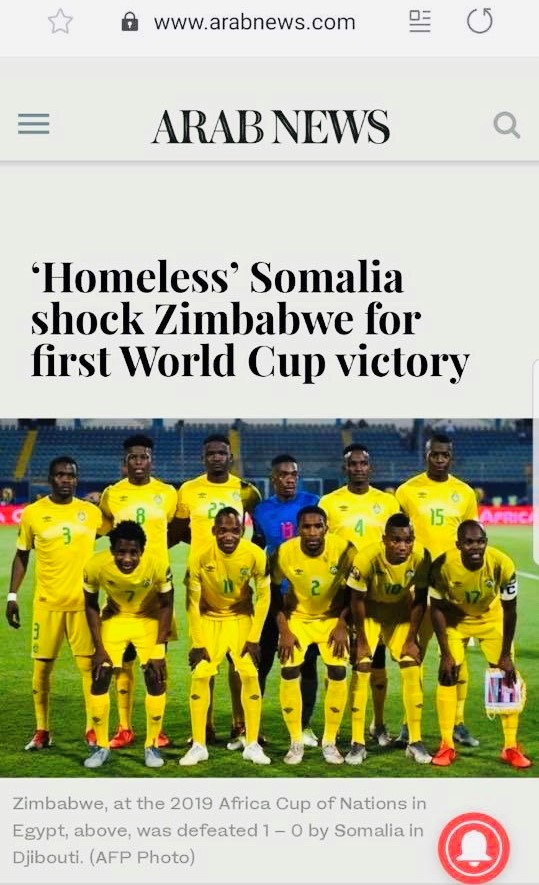 Somali Football Federation has condemned in the strongest terms possible the way that the Saudi-based Arab News covered the story about the 2022 FIFA World Cup qualifying match between Somalia and Zimbabwe.

The Saudi Newspaper published a piece about Thursday’s Somalia-Zimbabwe match with an unjustifiable headline that described Somalia as “homeless”.

“The use of such a term is intolerable and it clearly infringed upon the dignity of Somalia. We call on the Saudi Newspaper to apologies for the witless story they wrote about Somalia” Somali Football Federation director of communication, Shafi’i Mohyaddin Abokar, said in a statement.

“Before running such a rubbish story, they had to research and try to know why Somali Football Federation preferred Djibouti which is apparently clear, then I am sure they could have understood more about the relationship between the duo and that there is no difference between the peoples of both countries, meaning that if you are from Djibouti Mogadishu is your home and if you are from Mogadishu Djibouti is your home as well” the statement reads.

“It is nothing else, but they have demonstrated their hatred towards us. Instead of calling Somalia homeless, they could use another polite terminology that might reflect on the reason why the Ocean Stars played their homes games in Djibouti which is Somalia’s most brotherly nation on earth” the SFF press statement added.

“We are luckier than those in Saudi Arabia, because we have two home countries, Djibouti and Somalia and we are very proud of our two countries and those who ran the story should know that we are not homeless, but Djibouti is our home too. They have to behave themselves” Somali Football Federation director of communication, Shafi’i Mohyaddin Abokar, conclulded in the statement on Friday.