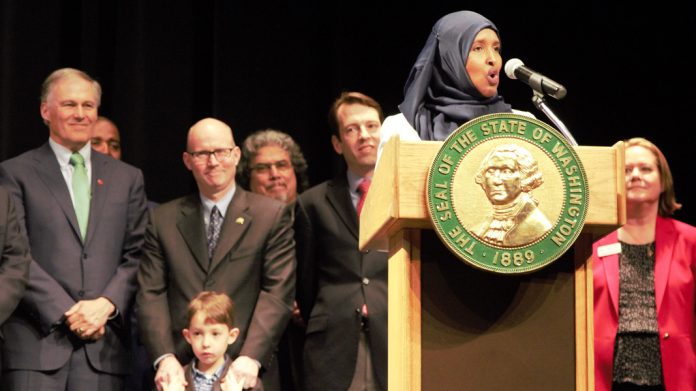 Ubah Warsame Aden, a Somali Washingtonian activist, speaking at the event as part of the leaders who have campaigned and worked on the bill. She spoke on behalf of OneAmerica.

Washington State Governor Jay Inslee signed a new bill that will make easy for many citizens to participate in the democratic process of the state. The Washington Voting Rights Act (WVRA) and four other voter measures were signed into law on Monday at Foster High School in Tukwila at the presence of huge number of people majority of whom were students of the school.

The WVRA is part of a larger package of bills that will expand access to democracy in Washington state primarily through voter registration. These include: automatic voter registration, same-day registration, pre-registration for 16 and 17year olds, and The DISCLOSE Act, which will expose the source of hidden contributions in campaigns. Governor Inslee who spoke at the ceremony announced March 19, 2018 will be historic day for Washington residents.

Introduced by Sen. Rebecca Saldaña, D-Seattle, the WVRA removes barriers in state law so that cities, counties, school boards and other local elected bodies can voluntarily adopt changes to improve representation in their elections systems and avoid costly litigation. The change will ensure that voters in communities across the state have better opportunity to elect candidates who represent their interests, removing obstacles that nearly 200 Washington cities and countless other local jurisdictions face today.

“The Washington Voting Rights Act puts power back into the hands of the people where it belongs,” Saldaña said. “It will empower disenfranchised communities, and people of color, to elect leaders that reflect their values and the rich diversity of our state. This is a big step forward in realizing a truly representative government.” 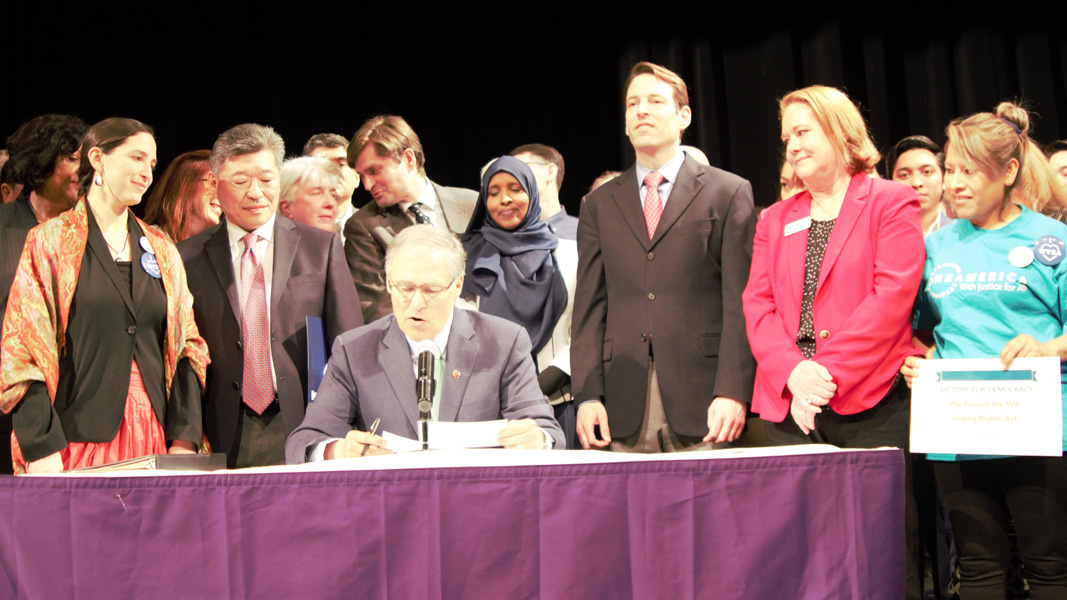 Governor Jay Islee signing the bill while surrounded by the leaders who sponsored the bill, the most notable are Bob Hasegawa and Rebecca Saldana to his right.

“Today’s success is the result of years of hard work and collaboration between legislators, advocates and members of the community,” Saldaña said. “These efforts will have a long and lasting impact on the health of our democracy.”

OneAmerica Vote which is an advocacy organization for immigrant rights have worked on the bill for six years. It is Chief Executive Rich Stolz issued a statement which read; “With the signing of the Washington Voting Rights Act, communities have won a hard-fought victory. It is fitting that this effort was led by three powerful women of color, Senator Rebecca Saldana, Representative Mia Gregerson and Senator Manka Dhingra, who were elected from the very grassroots communities who fought for years for a fairer and more just election system. We look forward to working to see the implementation of this historic bill and to the rich and diverse group of candidates who will now have greater opportunities to run for office and get elected. This is a shining moment for democracy in Washington State and a testament to years of grassroots efforts from OneAmerica Votes community members who believe in the power of organizing to make a fairer and more just democracy for all.”