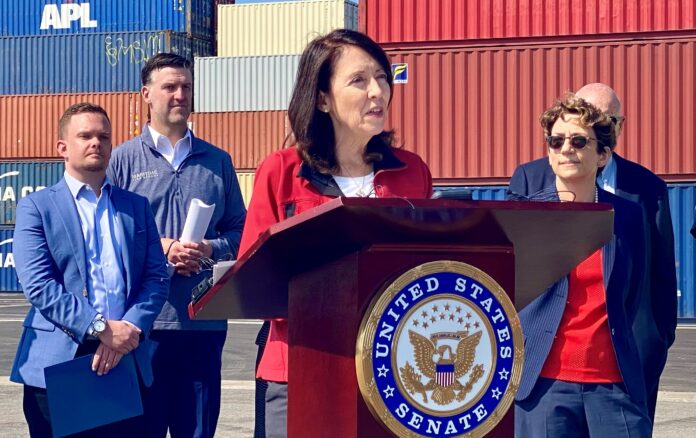 SEATTLE, WA – As chair of the Commerce, Science and Transportation Committee, Senator Maria Cantwell was instrumental in securing the majority of funds needed to complete the West Seattle Bridge repair project. Of the project’s $66.94 million repair costs more than half – $37.65 million – came from federal funding sources.

One portion ($11,250,600) of federal funding came from the Infrastructure for Rebuilding America (INFRA) program, which was created by Sen. Cantwell in 2015. The program helps local communities pay for nationally and regionally significant freight projects just like the West Seattle Bridge.

“Fast freight movement means jobs. Our farmers understand it, and the business community gets it,” Sen. Cantwell said upon her bill’s passage in 2015. “Now, for the first time, we have a grant program to fund multimodal freight projects.”

Shortly after the West Seattle Bridge closed in March 2020 due to a crack in the concrete, Sen. Cantwell spoke with then-mayor Jenny Durkan multiple times about helping the city of Seattle secure federal grant funding to help pay for the project.

In March 2021, Sen. Cantwell sent a joint letter alongside Sen. Patty Murray (D-WA), Rep. Pramila Jayapal (D-Seattle) and Rep. Adam Smith (D-Seattle) to U.S. Transportation Secretary Pete Buttigieg calling on the DOT to support the West Seattle Bridge’s application for an INFRA grant. While their advocacy was successful, helping the project secure an $11.25 million competitive INFRA grant, this was $10.3 million less than the city asked for, so instead of celebrating, Sen. Cantwell called on USDOT to help provide additional resources to the city.

“The stakes are high for both the traveling public and for the freight investments we are making at the Port of Seattle’s Terminal 5. We need answers now from the U.S. Department of Transportation on real solutions for providing additional federal investment to fix the West Seattle Bridge,” Sen. Cantwell said in June 2021.

Sen. Cantwell worked with the city, federal, and regional leaders to ensure the West Seattle bridge received additional funding and helped secure an additional $26.4 million in funding from federal formula programs, nearly $10 million ($7.6 million) more than the city had original estimated the project would receive from other federal sources.

The West Seattle Bridge closed on March 23, 2020 when city officials discovered that the cracks on the concrete main span were growing rapidly. The closure took Seattle’s busiest city-owned bridge out of use, forcing 100,000 average daily drivers and 25,000 average daily transit riders to find an alternative route.