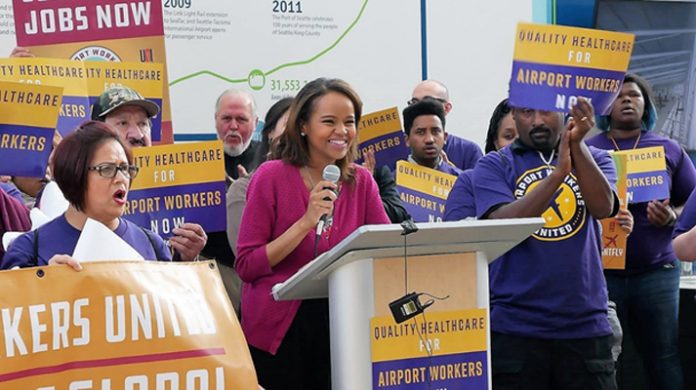 Runta News, SEATTLE—Sea-Tac passenger service workers held a press conference on October 2 to call for quality healthcare now. The workers who won the first $15 minimum wage in the nation came together to assert that too many of them live close to poverty because of inadequate healthcare coverage. They launched a new campaign for quality healthcare for all airport workers in solidarity with workers around the globe who held protests at more than 40 airports in 13 countries on October 2 to put airlines on notice to raise the standards for workers in every country.

At Sea-Tac, passenger service workers including baggage handlers, wheelchair agents, and cabin cleaners are calling attention to expensive, inadequate health plans. A recent survey conducted by SEIU shows that 41% of passenger service workers have no health insurance, and 73% do not have enough in savings to cover a $400 emergency medical expense.

“Two years ago, when I had thyroid surgery, I paid everything out of pocket. It cost well over $2,000,” says Abeba Zemou, a passenger services worker with Huntleigh at SeaTac. “With other bills and expenses, it took me one year of monthly payments to finally pay down my medical debt from the surgery. I need healthcare coverage, so I can be treated without worrying about sinking deeper into medical debt.”

“As the son of a baggage handler at Sea-Tac airport, I saw the economic opportunity my father’s union job created for my family. In response to stagnating wages and consolidation of wealth, our region made history in 2013 by passing the first-in-the-nation $15 minimum wage. We know that our work is not done. Working families should not have to choose between buying groceries and paying for medication. True equality of opportunity and economic stability can only be achieved when living wages go hand in hand with access to affordable health care to help families thrive.” —Congressman Adam Smith.

The fight kicks off as airport workers around the world are inspired by the New York Port Authority’s vote on September 27 to raise the minimum wage for 40,000 workers at JFK, La Guardia, and Newark airports to $19—which will be the highest minimum wage in U.S. history, once approved.

Through the International Transport Workers’ Federation and the UNI Global Union, airport workers held protests at airports that control a whopping 36% of world air travel, where nearly 4 million people pass through each day. This includes some of the world’s largest airports—including LAX in the U.S., Charles De Gaulle in Paris, Schipol in Amsterdam, and Flughafen in Frankfurt.

In the U.S., nearly half of all airport workers are paid so little that they have to skip meals or go hungry and nearly 30% are forced to rely on public assistance for basic needs like food, housing, and medical care. In Thailand, some airport workers are paid just $10 a day, which is half of the living wage for that country. Airport workers in Indonesia are only paid $1.50 an hour—far below what it takes to cover basic necessities. “In city after city all across the country, airport workers have won raises—doubling their income in some cities—and the right to form a union,” says Mary Kay Henry, President of Service Employees International Union (SEIU). “They’ve done it by coming together to elect leaders who work for all of us, no matter our skin color or zip code, and calling on those elected officials to hold greedy corporations accountable. We won’t stop until all working people—white, black and brown—can join together in unions for the power in numbers to win higher wages, affordable healthcare and a better life for their families.”

Contracted airport workers around the country are coming together in Airport Workers United, a movement of employees and their supporters raising their voices for fair wages and union rights to make our airports safe and secure for passengers, employees and our communities. By sticking together, speaking out, and going on strike 25,000 workers have joined SEIU and 120,000 have won raises or other improvements, including healthcare, paid sick leave, and job protections.