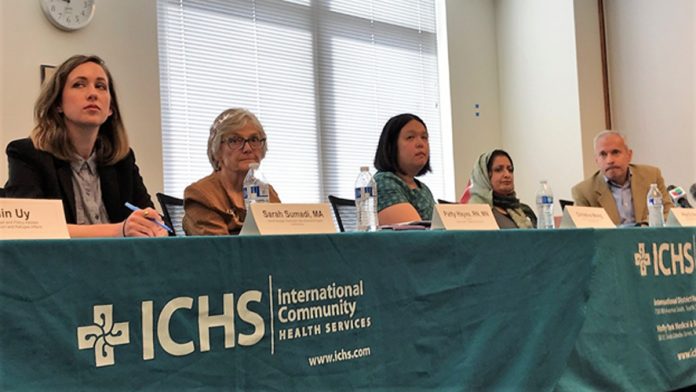 New federal regulations proposed by the Trump administration will hurt families’ ability to access crucial health and nutrition assistance, according to the Protecting Immigrant Rights-WA coalition, a group of organizations and service providers working with the state’s immigrant communities.

The regulations, released by the Department of Homeland Security in draft form on September 22, broaden the criteria by which immigration authorities may deny permanent resident status if an applicant uses essential public services like Medicaid, Section 8, the Supplemental Nutrition Assistance Program, the Medicare Part D prescription drug benefit, or other programs.

The rule would effectively impose an income test on immigration, pricing millions of families out of the American dream, said coalition members at the International Community Health Services clinic on Tuesday, September 25.

“This is another front in the administration’s war on working people,” says Roxana Norouzi, deputy director of OneAmerica said in a statement. “Trump is using backdoor policy to force immigrant families to make an impossible choice—either decline assistance they’re 100 percent legally eligible for, or jeopardize their family’s long-term future in the United States. The result will be a sicker, hungrier, poorer nation.”

By federal law, everyone seeking to become a permanent resident of the U.S. through a family member is already required to prove that they are not likely to become a “public charge.” Currently, for U.S. residents seeking green cards, the government defines a “public charge” as a person who has received cash income maintenance or been institutionalized for long-term care paid for by the government.

But the Trump administration would broaden the definition of public charge from primarily depending on to merely using a government program, and it would pertain to a wide range of additional forms of non-cash public assistance—among them Medicaid, food stamps, Section 8 housing assistance and Medicare prescription drug assistance. Lawfully present immigrants are legally eligible for these benefits.

Such a rule, say advocates, will drive immigrant families away from critical health, nutrition and other programs to help meet their basic needs.

“The Trump White House aims to damage the health and well-being of our communities,” said Jorge L. Barón, executive director of the Northwest Immigrant Rights Project (NWIRP), which offers legal assistance, advocacy and education to immigrant communities throughout Washington state. “They want to scare immigrant families away from accessing the support they are legally qualified for.”

An estimated 1 in 4 of Washington State’s 1.6 million children is either an immigrant or has a foreign-born parent. And nearly 80 percent of them are children of color.

“This proposal’s racially disproportionate effects are another affront to equal justice in America,” said Norouzi. “It would widen the gap between children in immigrant families and the opportunities they need to grow up to be strong and healthy. The President and Congress should be working to secure a better future for all children. Instead, they’re hurting children by hurting their parents.”

Fears that the use of public benefits would result in action by immigration authorities have already resulted in parents withdrawing children from participation in critical programs, providers of basic services have noted.

A satellite program of the Bellingham Food Bank saw as much as a 50 percent drop in immigrant participants as rumors stemming from a similar leaked draft rule spread through their community last year, according to the food bank’s Executive Director, Mike Cohen. Families returned, thanks to a careful and diligent community outreach effort, says Cohen, but the release of the new draft rule is likely to drive users away again.

“No matter where you come from, in America, you ought to be able to count on certain programs that deliver basic support if you fall on hard times,” said Thomas Reynolds, CEO of Northwest Harvest, in a press advisory before the event. Northwest Harvest distributes food to 375 food pantries, meal programs, and high need schools throughout the state.

Even though the public charge test does not apply to refugees or asylees, news of the proposed rule has stoked fears among those communities as well.

“The result is that everyone, regardless of whether or not the rule change would affect them, is more afraid to get help for themselves and their families,” said Norouzi. “Immigrants have asked service providers to discontinue their benefits because they would rather take their chances with hunger than with Immigration and Customs Enforcement.”

“This rule is cynically designed solely to deepen these fears in an effort to harm the health of our communities,” said Barón. “It’s another Trump administration attack on low-income families and their children, seniors, people with disabilities, immigrants and people of color.”

Access to supports like healthy food and prescription drugs promote not just the well-being of individual households but entire communities. Immigrant families should be encouraged, not dissuaded, from using needed services to help their families. Economists forecast that future growth in the labor force will come from immigration, and our future depends on the success of immigrant families.

OneAmerica, NWIRP, NW Harvest and other community-based organizations note that families need not disenroll from public benefits in response to the draft rule’s release. If the rule were to become final—which would take several months—immigrants would not be penalized for having received benefits before the rule was finalized.

Above all, families who fear they may be affected by this rule should know they’re not alone, and that there’s time to fight back.

Advocates expect the final version of the proposed rule to be published in the Federal Register in the next few weeks. Once published in the Federal Register, members of the public will have 60 days to file comments in opposition to its implementation. Coalition members are rallying 4,000 public comments from Washington state individuals and organizations in order to slow down or block the rule.