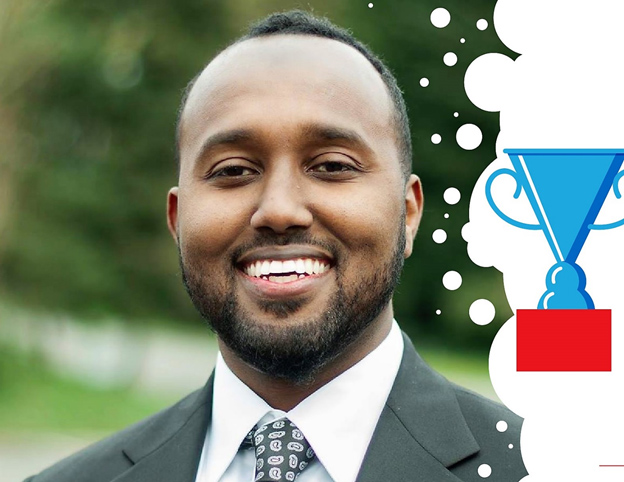 Zak Idan has become the first Somali Council Member in Washington State 2018 after he run a successful campaign with the support of most community members including the young professionals who rallied behind him with the all energy and financial they had. We have been watching Zak lately to evaluate his achievements and to see if he has simply become a typical politician who disappear after they sit on the seat.

During our investigation what we found was the opposite. Zak tirelessly involve in the community affairs and connected to all segments of them whether they are young, parents, or elders. He is a humble person who always at the community gatherings and sitting in the back seats as one of them. The few times Runta News had the opportunity to sit with him over coffee, we found that he is a man of big dreams no like anyone we have seen before.

Some of the things Zak is proud of and shared with us as part of his achievement in the short period of time he has been in office are as follows;

Those achievements are quite big to the kind of freshman council members who spend their first year learning the ropes. Zak Idan entered office pushing for change and these are just some of his few accomplishments throughout his first year.

Members of the community are truly proud of him and for surely expecting more from him. Lately leaders of the community such Imams, activists, and businesses have come together in order to protect their interests which are threatened by developers who are taking over their centers with their deep pockets. Mama Warda, left, and Sharifa are just two out of 50 people whose businesses will soon displaced from SeaTac and Tukwila.

Leaders such as Imam Sheikh Ahmed Noor of Abubakr Mosque has been relentlessly fighting for the community and were trying to preserve the place has been known as “Little Mogadishu” for the past 20 years. Displacement or gentrification continues in and around Seattle and it has affected mainly low income people some of whom are the Somalis and who own most small businesses at the crossroad between Tukwila and SeaTac. With the leadership of someone like Zak who is highly knowledgeable about policies, we can achieve big. I hope we will produce in the next elections better qualified candidates so we could look big, respected, and strong in the eyes of others. Let us listen to one another and work together as a team. Zak deserves trophy and respect from every member of the community. He needs a unified community. Far Kaliya Fool Ma Dhaqdo.