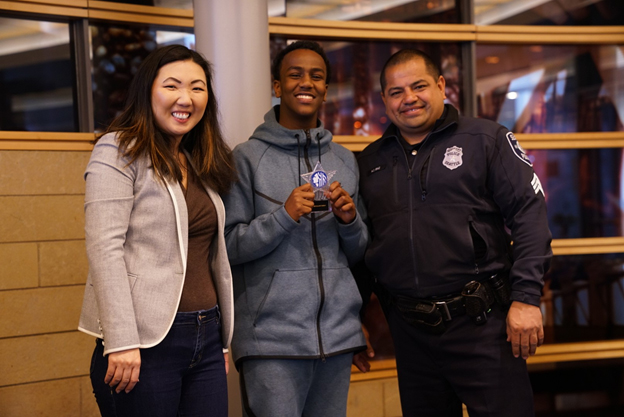 SEATTLE (May 13, 2017) – Community members gathered at City Hall to celebrate the completion of a groundbreaking program intended to keep immigrant young people out of the criminal justice system.

IFI builds off the award-winning success of the Refugee Women’s Institute (RWI) launched in September of 2014. OIRA designed this innovative program to build understanding and trust between refugee communities in Seattle and the SPD. The institute, the first of its kind in the nation, aimed to build a grassroots network of refugee women leaders while increasing the cultural competency of the female officers who participated. Evaluations of the program showed the RWI participants reported stronger one-on-one relationships with each other. And short- and long-term data indicated that the participants had meaningful interactions that helped overcome bias for both communities. In 2015, the U.S. Conference of Mayors selected RWI for an innovation award.

“During RWI, we heard mentioned repeatedly a need to build trust and relationships between not only police officers and refugee communities, but also between foreign-born parents and their children,” says OIRA director Cuc Vu who herself was raised in a refugee family in Olympia. “That’s why when our office considered the next step for RWI, we quickly recognized the need to ensure that kids from immigrant families also benefited from bridge-building conversations.”

The work of building IFI started shortly after RWI ended, with the creation of the IFI Advisory Committee. Members of this body includes immigrant youth of color, immigrant/refugee parents, and other key stakeholders from the juvenile justice system, community-based organizations, King County, City of Seattle, service providers, and academia. This committee helped shape key aspects of the program, including the curriculum, recruitment, and outreach. They also helped create the program’s objectives:

Strengthen the leadership skills of immigrant youth of color and their caregivers to understand and navigate City, educational, and legal systems.

Bolster trust between immigrant families and the police, so that families are better able to self-advocate and to find resources to help them overcome systemic barriers.

The program organizers envision that the above objectives will help empower immigrant youth that are disproportionately represented in the juvenile justice system, disrupting pathways to that system.

During the graduation event at City Hall, the attendees heard from Deputy Mayor Hyeok Kim, SPD Acting Lieutenant Adrian Diaz, and OIRA Director Cuc Vu. Participants also shared their reasons for participating in IFI, as well as their favorite moments. Program participant Abdullahi Farah talked about how his grades started to increase after the first few weeks in the program.

Program participant Khadra Mohamed who is a Somali refugee and whose son also participated in the program stressed the importance of not only continuing the program, but also expanding it, “I think it would also be best to have such a program closer to our neighborhood. Many families will benefit from it.”