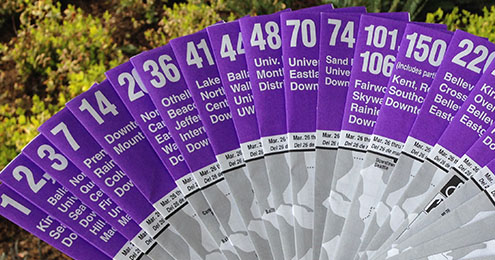 Tens of thousands of people across Seattle and King County will soon benefit from better integration of Metro and Sound Transit service that connects more riders to expanded light-rail service. Metro will also implement the third phase of service expansion approved by Seattle voters in November 2014 that will deliver more reliable and frequent service for Seattle neighborhoods.

The service improvements will go into effect March 26, a week after the new University Link light-rail stations at Capitol Hill and the University of Washington open on March 19. The additional service in Seattle will provide more routes connecting commuters to South Lake Union.

“We will soon deliver more frequent bus service to more neighborhoods, connecting riders to fast, reliable, high-capacity light rail,” said Executive Constantine, who is also Chair of the Sound Transit Board of Directors. “It’s an example of how Metro and Sound Transit are working together to create a more convenient, seamless transportation network.”

“Thanks to voters, we now have completed the largest expansion of bus transit in Seattle since Metro was founded,” said Mayor Ed Murray. “Now West Seattle commuters can ride the C Line straight to South Lake Union without changing buses. And in neighborhoods all over the city, frequent transit service is only a short walk away.”

For more please visit at http://metro.kingcounty.gov/up/scvchange.html