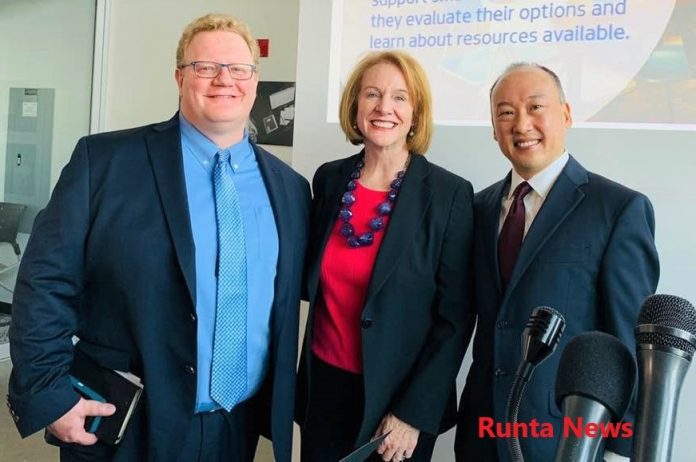 Mayor Jenny Durkan Announces Her Fare Share Plan to Mandate A Minimum Wage and Provide Critical Worker Protections for Uber and Lyft Drivers, Invest Millions of Dollars in Housing Near Transit and Transportation Projects Like the Downtown Streetcar

Runta News-SEATTLE (September 19) – Standing alongside housing, transit, and worker advocates, Mayor Jenny A. Durkan yesterday announced her new Fare Share proposal to mandate that Uber and Lyft drivers be paid a minimum wage in addition to compensation for benefits and expenses, which will go into effect on July 1, 2020. Her Fare Share plan will invest millions of dollars in housing near transit and in transportation projects, including the Center City Connector streetcar. Finally, her proposal would also establish a first-in-the-nation independent Driver Resolution Center to provide Uber and Lyft drivers representation services and an impartial process for settling unwarranted deactivation by the companies.

“Seattle is a national leader in ensuring our workers are treated fairly and can build a better life for themselves and their loved ones. From the Fight for $15 to our Domestic Workers Bill of Rights, we’ve always been the city that puts our workers before any company’s bottom line,” said Mayor Durkan. “In this rapidly changing economy, we need to make sure our hard-fought worker protections are available for our Uber and Lyft drivers, who work long hours to help all of us get where we need to go. This proposal is about ensuring Seattle grows into the city we want to be. Being a city of the future isn’t just about the incredible gains of the new economy. It’s about being a city where all our workers are treated fairly, our communities can afford to live where they work, and everyone, regardless of income or ability level, has access to high-quality transit.”

Right now, Uber and Lyft pay an existing City fee of $0.24 per ride to fund wheelchair accessible taxis and regulation of the industry. Mayor Durkan’s Fare Share plan will impose an additional $0.51 per ride charge on Uber and Lyft that would allow the City to invest more than $52 million for housing near transit, $56 million to fully fund the Center City Connector streetcar, and $17.75 million to create an independent Driver Resolution Center for Uber and Lyft drivers. Revenue projections are estimated through 2025.

Mayor Durkan also announced legislation that will mandate drivers be paid a minimum wage plus benefits and expenses beginning July 1, 2020. Understanding the complexities of the current business model, the City will commission an independent study to evaluate average hourly work and expenses for drivers as well as costs to drivers not currently included such as paid sick and safe time, worker’s compensation, and unemployment.

“We strive to be a city that embraces a robust, innovative, and competitive environment for consumer choices and services,” said Council President Bruce A. Harrell. “Transportation Network Companies (TNCs) entry into the market has been embraced by riders and has been demonstrated with millions of rides per year after Seattle legislated TNCs in 2014. The City is listening to the concerns from drivers and the legacy industry to examine a number of issues to address fair compensation, rights of drivers, and to ensure a level playing field for all industry participants. We have no interest in stymieing the industry. All TNC drivers should be receiving fair compensation for their work. Council will work closely to examine the Mayor’s proposal in a transparent manner and will provide an opportunity for the public to weigh in over the next few months.”

Seattle has been the fastest-growing city in the country over the past decade, and our growth has led to many challenges, including the fact that many workers like Seattle’s Uber and Lyft drivers, nurse assistants, construction workers, and preschool teachers can’t afford to live close to their jobs. Mayor Durkan’s proposal will generate more than $52 million to build over 500 units of housing near transit. Housing built from funds generated from the charge on Uber and Lyft will focus on families and individuals making between $15 and $25 an hour. The Seattle Office of Housing will distribute these funds via its yearly competitive process.

Mayor Durkan believes that all our residents should have access to reliable, efficient, and equitable transit option to help manage congestion by limiting trips in cars downtown and to help Seattle meet its climate goals. Last year, Uber and Lyft had 24 million rides in the City of Seattle, half of which either started or ended downtown. Uber and Lyft vehicles that are circling or idling downtown contribute to congestion that slows down buses and clogs streets and the curb.

To ensure people and goods can move quickly and safely through Seattle, the proposed tax on Uber and Lyft will generate another $56 million in proceeds over five years to fully fund the construction of the Center City Connector streetcar. In 2018, the streetcar program saw an 18 percent ridership increase, and a 31 percent increase specifically on the First Hill line. After 2025, new revenue will fund transit, bicycle, pedestrian, and safety projects.

“As Seattle continues to grow, we need policies that support more transportation and housing options, and strong worker protections to make Seattle a place where everyone can thrive. By investing in streetcar, bus, light rail, biking, and walking improvements in Seattle, we can give everyone more choices to get where they need to go, spending less time in traffic and more time with loved ones,” said Alex Hudson, Executive Director of the Transportation Choices Coalition. “Mayor Durkan’s legislation matches Seattle’s growing demands – better transportation, affordable housing near transit, and well-paying jobs – to help everyone access opportunities to live a healthy life. Our actions today will impact the health of our communities and environment for generations.”

Finally, the Mayor’s proposal is expected to support a contract with an independent nonprofit organization to create the first-in-the-nation Driver Resolution Center, which allows companies and drivers to voluntarily resolve disputes regarding deactivation. Specifically, the Driver Resolution Center will provide Uber and Lyft drivers support through an impartial arbitration and appeals process, and will offer culturally responsive outreach and education services on driver rights since many drivers are immigrants and refugees.

“Seattle’s technology-driven prosperity has brought undeniable benefits,” said Nicole Grant, Executive Secretary-Treasurer of MLK Labor, which represents more than 150 unions. “But it has also placed new stresses on working people, people of color, and immigrants. We need to use every tool we have to make sure Seattle’s growth is working for everyone and giving workers a fair share.”

The Mayor will work with the Department of Neighborhoods and the Innovation and Performance Team to conduct deep community engagement with Uber and Lyft drivers to ensure any potential proposal best serves the needs of these workers.