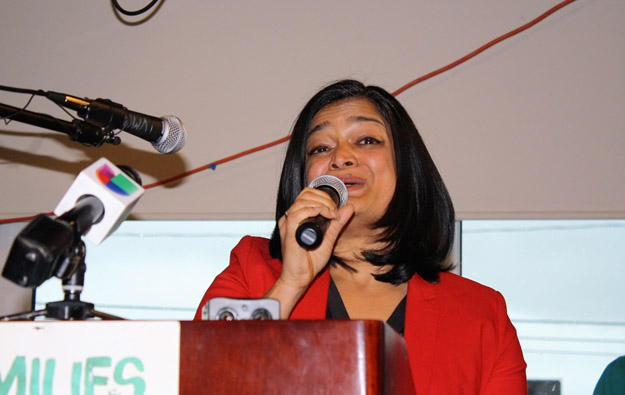 SEATTLE, WA– On Friday, February 22nd, Representative Pramila Jayapal, along with a coalition of immigrant rights organizations, brought together activists, press, and directly-impacted immigrants to protest Trump’s abuse of power, his most recent example of xenophobic and racist executive overreach.

Rep. Jayapal kicked off the event stating that immigrants will not be used as a bargaining chip. She is the only representative who voted against the $333 billion budget deal that further militarizes the border and increases incarceration of immigrants.

Karen Guzman, an immigrant with undocumented parents and an organizer with Colectiva Legal del Pueblo, and Karen Martinez, an undocumented client and criminal justice student at the University of Washington, shared their powerful and emotional stories about the fear they face on a daily basis of being separated from their families by ICE. They also shared a story from a client who was detained at the Northwest Detention Center, a for-profit detention center known for its inhumane treatment of its residents. That client said plainly, “they did not care about us.”

Their voices were joined by Graciela Nunez, a Venezuelan DACA recipient. Nunez spoke about the president’s hypocritical and self-interested opposition to Maduro’s brutal dictatorship in Venezuela. 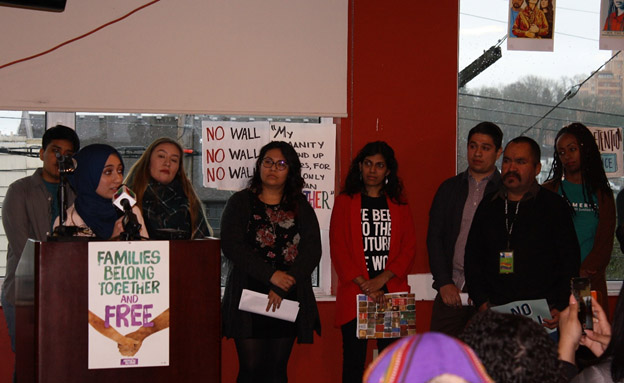 “Mr. President, your destruction is reaching new shores,” she said, directly addressing Trump. “Your racist ideology and twisted perception of worthiness is harming us all the same.”

Next up was Enoka Herat, Police Practices & Immigrant Rights Counsel at the ACLU, who spoke about the organization’s legal fight to stop Trump’s evasion of congressional funding restrictions.

Cinthia Illan Vazquez and Paul Quinonez Figueroa, both “undocumented, unashamed, and unapologetic” youth from the Washington Dream Coalition, shared how increased funding to immigration enforcement hurts immigrant communities. They called on the state legislature to pass the Keep Washington Working Act, a policy that would keep local law enforcement focused on local policing rather than working with ICE to inflict harm on communities.

The event closed with Varisha Khan, Director of the Muslim Committee for OneAmerica Votes. Pointing out the connection between the Muslim ban and the proposed border wall, Khan outlined the common threads in Trump’s administration: xenophobia and racism.