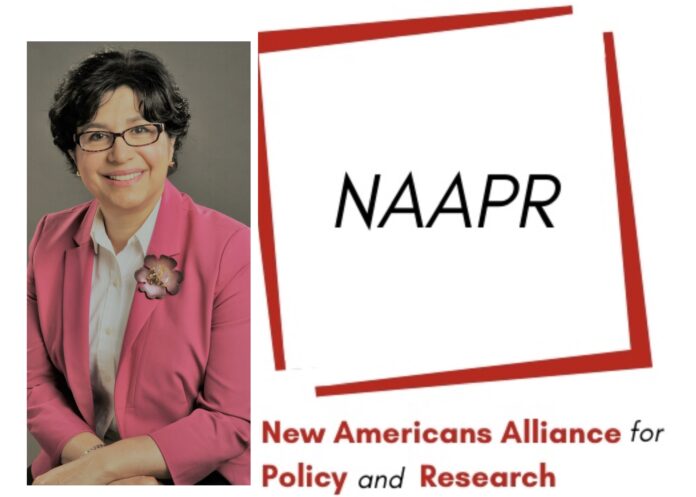 As the number of people forced to flee their homeland increased to 80 million and the number of refugees exceeded 26 million worldwide, we watched the Trump administration decimate the U.S. Refugee Admissions Program. Despite many efforts to increase refugee admission, in 2021, under Biden’s presidency, only 11,411 refugees of the 62,500 goal were admitted to the U.S.: the lowest number since the program’s inception in 1980.

As a displaced person herself, Dr. Someireh Amirfaiz, remembers the feeling of anxiety and helplessness she felt when the Shah was overthrown in Iran. When    immigration officers came to interview Iranian students, herself included, so they could identify Khomeini sympathizers and deport them, she began to realize the consequences of United States foreign policy on the lives of millions of immigrants already living in America and the refugees who hope to find sanctuary here. Throughout her life, this knowledge has only deepened as she has comforted refugees refused jobs because they appear Muslim, heard her own U.S.-born children being called derogatory names, and grieved with the family of a refugee that committed suicide because of the hopelessness of her situation. In response, Dr. Amirfaiz launched the New Americans Alliance for Policy and Research (NAAPR) in December 2021. NAAPR’s focus is on reshaping the dominant narrative of refugees and immigrants by expanding the influence and political power of refugees and immigrants through policy analysis, education, and community action research to inform public policy and practice.

According to Dr. Amirfaiz, the public and media profoundly impact policies, as politicians’ views of who is deserving or undeserving often decides who gets what. Recent examples of political decisions include the Muslim ban, refugee admission and quota, securing the southern border of the U.S., and questioning asylum seekers’ legitimacy. In her own words, “We cannot ignore how racist assumptions undermine our rights as immigrants and refugees. Look at the visual images of us. Because of our skin color and religion, the media portrays us as uncivilized individuals lacking personal or political agency who are devoid of ‘valued’ skills, thereby draining America’s resources while seeking to inflict harm on ‘real’ Americans. We deserve a government that sees us, hears us, counts us, and includes us in the decision making surrounding the policies affecting our lives, including refugee admission and immigration policies.”

She continued by noting that the recent images of Ukrainians fleeing their homeland and the destruction of their country are especially painful for refugees and immigrants who come from war-torn countries. While she is delighted that President Biden took Russia’s invasion of Ukraine seriously during his State of the Union address, she questioned his silence on the plight of the people of Afghanistan. “After the 20-year American occupation of Afghanistan, as well as the ongoing war in Yemen and Syria, there are more than seven million Syrian, two million Yemenis, 2.3 million Iraqi, and 2.5 Afghan refugees. And those numbers are excluding those who are internally displaced! We need to demand that the U.S. take responsibility for the repercussions of the ‘War on Terror’ by accepting more refugees from this region and creating more robust refugee resettlement policies,” said Dr. Amirfaiz.

One of NAAPR’s primary goals is to build partnerships with other nonprofits to advance the interest of refugees and immigrants. When Dr. Amirfaiz created NAAPR, she knew many other nonprofits were doing great work. That’s why she envisioned NAAPR as a way to connect people and groups already serving refugees and immigrants. In light of this, NAAPR’s first initiative, in collaboration with its partners, is hosting the 2023 Refugee Community Building Conference from June 20-21. This conference is the only gathering that brings together refugees, philanthropists, government officials and staff, refugee organizations’ representatives, and members of the public to learn, discuss, and take action on the most urgent issues facing refugees. For more information about NAAPR or the conference, visit www.naapr.org, follow NAAPR on social media or contact someireh@naapr.org.

Anti-Islamophobia “Roadshow,” asks Washingtonians to Act from Faith, not Fear