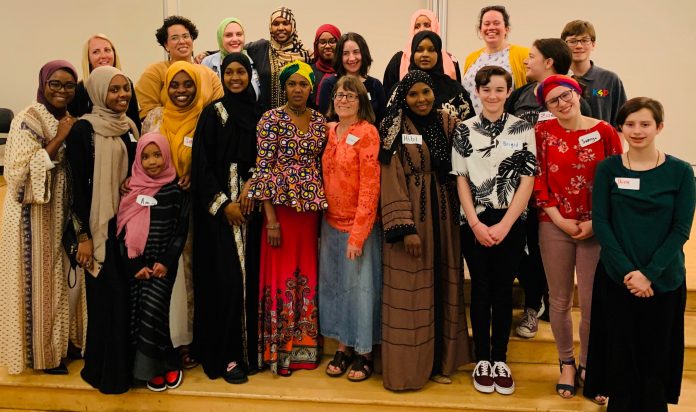 The first Interfaith Iftar which was organized collectively by Kids4Peace, East African Community Services, and Wassat was held on Saturday at New Holly Hall in South Seattle. As seeing in the picture, it has brought diverse community together.

Runta News (REDMOND, WA; 5/14/2019) — On Wednesday, May 15, 2019, more than 400 people will break bread together in celebration of the Islamic month of Ramadan at the Annual Interfaith Iftar (breaking of fast) hosted by the Muslim Association of Puget Sound (MAPS).  MAPS, located in Redmond, WA, is the largest mosque in the Northwest.  The theme for the program is “Hope Against Hate & Hurt.”  The program will include a panel discussion by speakers who have directly been hurt by anti-Muslim hate incidents but who nonetheless find hope and resilience in their faith.

“Ramadan is a deeply spiritual month for Muslims during which we recount God’s blessings as we open our fast daily,” said Omer Iqbal, Chair of the MAPS Interfaith & Outreach Committee.  He continued:  “The Northwest community that we are part of is also one of God’s wonderful blessings.  This interfaith Iftar gives us an opportunity to be with them at such a spiritual time.”

“The annual interfaith iftar is a wonderful time to bring the community together, break bread together, and commemorate a month that is holy and special to Muslims across the globe,” said Theresa Crecelius, one of the program’s panel speakers, whose father-in-law was killed in an anti-Muslim attack in Portland.  “At a time when there is so much hate and hurt, we strive to focus on the hope, optimism and resilience that our faith teaches, and help share the spirit of Ramadan with the entire community.”

Muslim Association of Puget Sound (MAPS) is the largest Islamic organization in the Pacific Northwest, serving over 5,500 American Muslim families who trace their roots to over 40 countries.  MAPS is very active in the community through a range of social and charitable activities.  For more info, check out:  www.mapsredmond.org