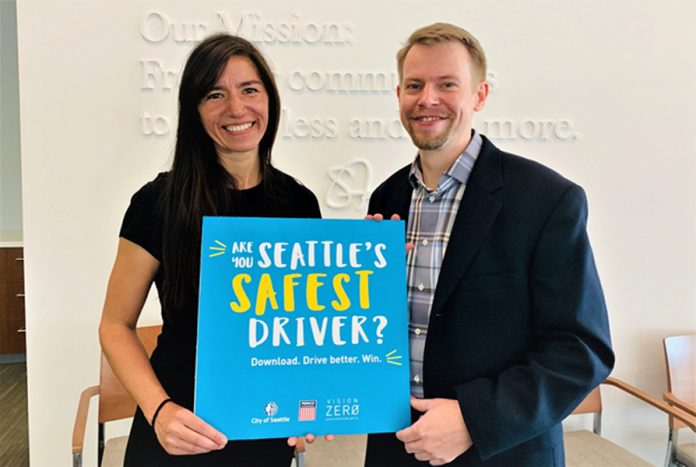 Allison of Vision Zero with Russell Lebert, the 2018 Seattle’s Safest Driver winner during a press conference on Friday at Pemco Insurance Co.

When it comes to traffic safety, we’re talking about a culture change – a shift from accepting accidents, to preventing crashes and making streets safer for everyone. This shift is going to take changes big and small, from public and private partners, and from individuals.

That’s where you come in.

May 13 – July 7, the City of Seattle is promoting Seattle’s Safest Driver 2.0, an app-based 2-month safe driving competition in support of its Vision Zero efforts to end traffic deaths and serious injuries on city streets by 2030. All you have to do is head to the app store, download, and drive (safely). The app tracks speeding, harsh acceleration and braking, turning, and phone distraction. You’ll compete for bi-weekly prizes, and if you join within the first four weeks of the competition, you’ll be eligible to win the $5,000 grand prize, made possible by a continued partnership with PEMCO Insurance.

Don’t live in Seattle? You can still join. This is a regional competition, open to residents of King, Pierce, Snohomish, and Kitsap counties, age 17 and up. To be eligible for prizes, a portion of your drive trips must occur within the City of Seattle.

Don’t drive? This is a multi-modal competition! The app also tracks transit and bike trips, and we’ll be offering bi-weekly prizes for folks in those categories as well.

So, encourage your friends, family members, and co-workers to download the free app. You’ll be able to set up your own leaderboard to settle the age-old debate of who’s the better driver.

Does this really work?

The short answer is, yes! It turns out, the same technology that some folks are glued to (even while driving), could steer behavior change the right direction.

SDOT ran an initial contest in 2017/2018, engaging 4,000+ people in positive behavior change. Across the top 50% of users, we saw phone distraction drop 20% and speeding drop 16%. Distraction and speeding are two of the top contributing factors to crashes in most cities (up there with impairment and failure to yield), so we were pleased to see these results.

More impressively, people who started with scores lower than 90 (they had the biggest room for improvement) saw a 26% reduction in distraction and 32% reduction in speeding over the 8-week competition and for the 3 months after.

With these positive results, we’re aiming to engage even more residents across the region in this safe driving competition.

Support safer streets for everyone 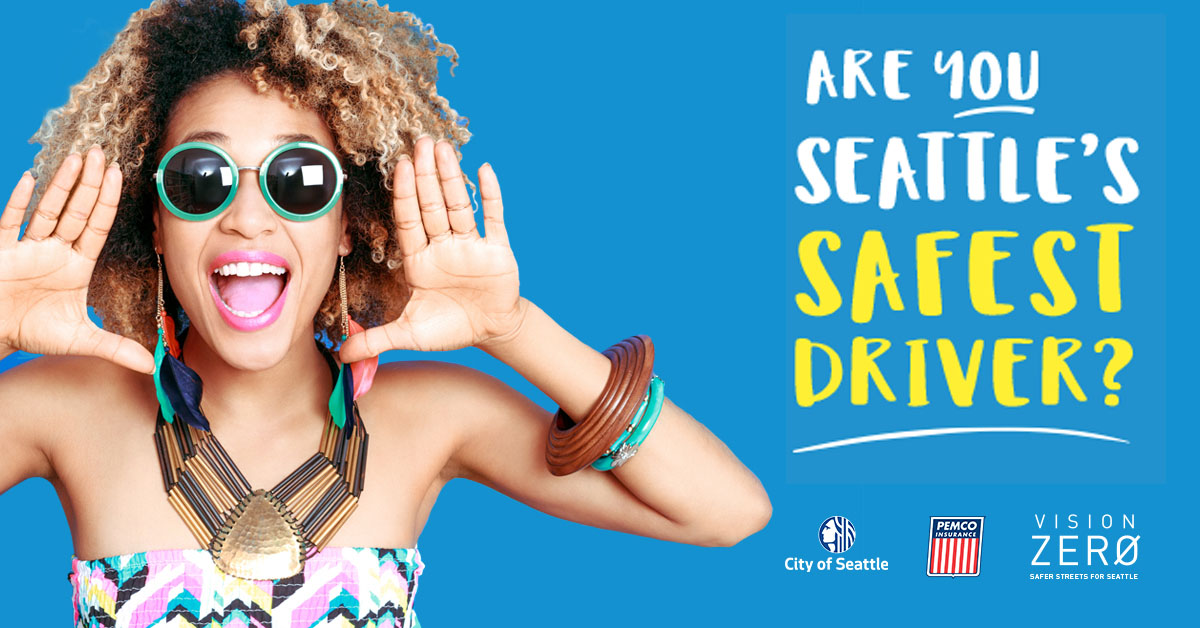 Seattle is one of the safest cities in the country, but every year, close to 20 people lose their lives in a crash, and more than 150 people are seriously injured. These are our friends, family members, and neighbors. There’s more we can and should do, and with your help, we can achieve Vision Zero. So, download, drive better, and win. And after you download the app, take the pledge to say crash, not accident.