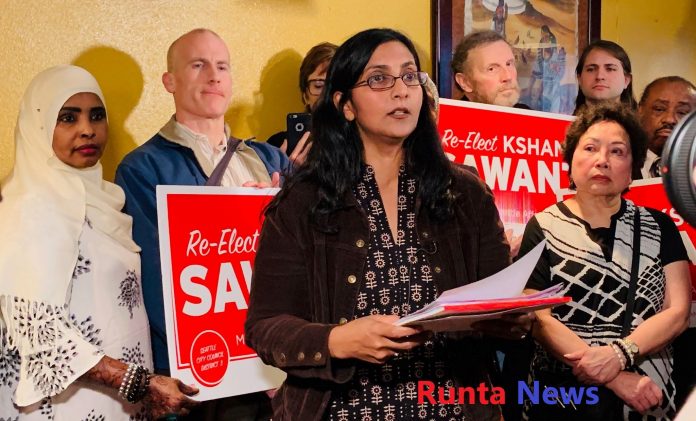 With 3,500 Signatures from District 3 Residents, Kshama Sawant Only Candidate In Seattle City Council Elections to File For Office Via Petition

In a year with a record-breaking 56 candidates filing for Seattle’s City Council elections, District 3’s City Councilwoman Kshama Sawant was the only candidate to file for office through signature collection.

“While most campaigns pay a large fee to run for office, mine have always filed by collecting petition signatures,” explained Kshama Sawant. “CASE, the Chamber of Commerce’s corporate PAC, already sits on a war chest of over $700,000, which they will use to try to buy this election. Like always, my campaign is not for sale: we take no donations from business lobbyists, big developers, CEOs, or corporations. We are building an entirely grassroots campaign, and collecting these signatures is a key opportunity to talk to thousands of people in our district about how we can fight for the city working people in Seattle need.”

To file to run for office in King County, candidates must either pay 1% of their potential annual salary or collect a similar number of signatures from residents in their district.

“Seattle’s City Councilmembers pay themselves $130,000/year, the second most of any City Council salary in a major U.S. city, while our city is increasingly becoming a playground for the rich,” said Kshama Sawant. “To stay accountable to working people in Seattle, I accept only the average worker’s wage, donating the rest of my salary to grassroots social movements.”

With 3,500 signatures from voters in District 3, Kshama Sawant’s campaign collected almost 3 times the required 1233 signature threshold. “Over 100 volunteers spent hundreds of hours collecting these signatures,” explained Chris Gray, Kshama Sawant’s 2019 campaign manager. “But to be honest, it was an easy task because there is a deep hunger amongst working people in Seattle for policies like rent control and taxing Amazon and big business to create thousands of affordable, socially-owned homes.”

“In addition to the 1500 people who have signed my office’s petition for rent control, our re-election campaign has already talked to thousands of people who agree that Seattle needs rent control now, as an emergency measure to address Seattle’s sky high rents,” said Councilwoman Kshama Sawant. “We plan to use this election year to launch an all out fight to pass rent control in Seattle and to overturn the state’s undemocratic ban.”