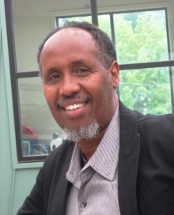 After one of the most bitter and divisive campaigns in US history was concluded November 8, people in the United States including the Somali Americans are in a state of shock and disbelieve. Majority of those who were disappointed are moving to the next step which is watch and see what happens after he resumes the office in January. Donald Trump has made no secret of his agenda of undoing of Obama’s achievements including the Affordable Care Act aka Obama Care. His tone during his speech rallies was not easy to swallow for millions but that was not enough to turn the tide against him and now he is the president elect of the United States of America whether we like it or not.

Somali Americans are one of those groups who worried about their future under Trump administration. Rallies are taking place right after his election in many major US cities including Seattle which has second largest Somalis in the United States. I hear cry and lamentation on the radios, televisions, and social media sites, but not yet confronted one Somali who does such, and the reason maybe be we are used to disappointments. In fact, those few Somalis I have met just days before the election were indifferent who will win and even some were leaning toward Trump. “Oh Wow. Why?” you might say. People accuse Hillary while serving under Obama’s administration for the disaster that had been clouding over many Middle East Countries that have enjoyed peace during Bush administration who was thought worse when he invaded Iraq for no good reason.

Donald Trump has already shown a conciliatory tone during his victory speech and praised Hillary for the service she provided to the nation. Remember, their last public debate, Donald promised to put Hillary in jail if he wins. I am optimistic that Trump has forgiving heart and will bring peace to our suffering people in the Muslim world and jobs and opportunities to all Americans. He is not a liar and unlike Obama and Hillary he speaks straight forward and says out loud what is in his mind. He seems he has a big heart for everyone and as he said “wants the best for every citizen” including us.

Somalis in America have come to the United State to realize the American dream. Actor Barkhad Abdi, Minneapolis Council Member Abdi Warsame, and MN StateSenator Ilhan Omar are great examples for our over achievements in this country. We are accepted for who we are and we should have the confidence that we can achieve even bigger. We should not lose hope on the rhetoric during the campaign. Candidate Trump has also endured so much insults and now he is the most powerful man on earth. I believe we have not lesser skin than those on whom jokes were made. Whatever he said on Somalis during the campaign, should become thing in the past. I have met educated people who told me we, Somali, are the most resilient people on earth when they have seen what has been happening in Somalia time and after.

My fellows, Somali Americans, put aside the fear and move on with the majority Americans. You have endured so much here and home. Now we have the best chance to even farther our interest here and at home with Trump administration. We have to put our eggs in different baskets as they say and ride smoothly with the tide. It is time for us to establish a bigger union among us especially using our younger talented generation to become one of the leading Muslim figures in America. Let the sky be our limit accordingly to our goals and dreams, and that will only happen if we participate actively in business and the politics of this country. GOP is known for strong ethics such as keeping families together and valuing hard work and those are also the values we have known to care so much. Let us congratulate Trump and be part of his journey of Making America Great Again.

A Photo Journalist, Activist, and Editor in Chief of Runta News www.runtanews.com He lives in Seattle,