Washington, D.C. – Congressman Smith released the following statement in response to President Trump’s decision to recognize Jerusalem as the capital of Israel:
“Since its formation in 1948, the nation of Israel has been under near constant threat. I strongly support Israel, and have advocated for robust U.S. engagement to help ensure their security. It is critical that we continue to press for a comprehensive two-state agreement that creates durable states for both the Israeli and Palestinian people. Long-term peace is a goal that has long eluded all parties, however it is critical that we not lose sight.
“The President’s decision today to recognize Jerusalem as the capital of Israel will not help advance this goal, and will only serve to increase regional instability. Ultimately the U.S. gains nothing from this announcement, and this Administration has chosen to further isolate itself from our global allies. There is no reason that the President could not choose to sign an additional waiver preventing the U.S. Embassy’s move to Jerusalem, and the damage this does to any ongoing negotiations will be significant.” 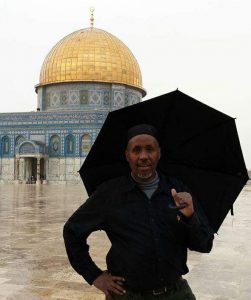 Jerusalem is the second holiest city for Muslims after Mecca. Chief Editor of Runta News, Mohamud Yussuf, paid visit to the city in November 2015. Facebook feed the Editor has posted on his wall soon Trump’s announcement was written as this, “Can’t express in words how was the feeling. It will never fade from my memory.”