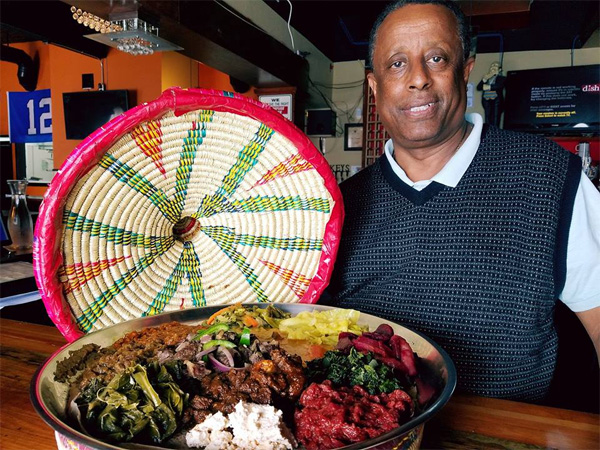 Owner Terfera Girma and his wife are living the dream one day at a time. The couple, born and raised in Ethiopia moved to the city of Seattle in 1987 with the dream of one day opening up a restaurant. During his early years in Seattle, he joined Shoreline Community College to further his education but soon realized his passion was to become an owner and operator. He dropped out to start his fund to open up a restaurant. In 1994, he was able to purchase his first home and shortly after welcomed a beautiful daughter in 1996.

In 2015, Terfera saw an opportunity to take over the Lalibela Ethiopian Restaurant located between Martin Luther King Jr Way & 28th Ave which had recently closed after running since 1998. After gaining ownership of the restaurant, Terfera spent several months remodeling it to create an authentic, community driven, Ethiopian restaurant that served dishes you’d find back home.

The first is called “injera,” an East African sourdough-risen flatbread, slightly spongy texture made of teff flour, and naturally vegan and gluten-free serves as a spoon for lentil, bean, meat, and vegetable sauces. The ingredients to prepare the injera bread are shipped directly from Ethiopia to maintain the traditional flavors. Due to popular demand, Terfera plans to package the injera and supply it to customers at large scale in the near future. One of his neighboring restaurants is buying the injera and producing custom sauces to pair with it for their customers.

Another local favorite is the “Meat Agelgil Special” which consists of Kitfo, minced raw beef, marinated in mitmita (a chili powder-based spice blend) and niter kibbeh (a clarified butter infused with herbs and spices), tibs, kei wot, alicha, gomen besiga, and some veggies. For those that are looking to get something outside of the traditional mix, you can order a hamburger, wings, or even a salmon sandwich.

As a way to reach even more locals around Seattle, Terfera has adopted UberEATS into his delivery system to offset slower times of the day. He said it has been convenient for both ownership and the customers looking to get their Ethiopian fix without having to drive.

We asked what admired Terfera most about Seattle and he said, “Seattle is home, I lived in this city for a long time, love the scenery, love the people, very friendly, good opportunity for life to change. Seattle is like my kids.”