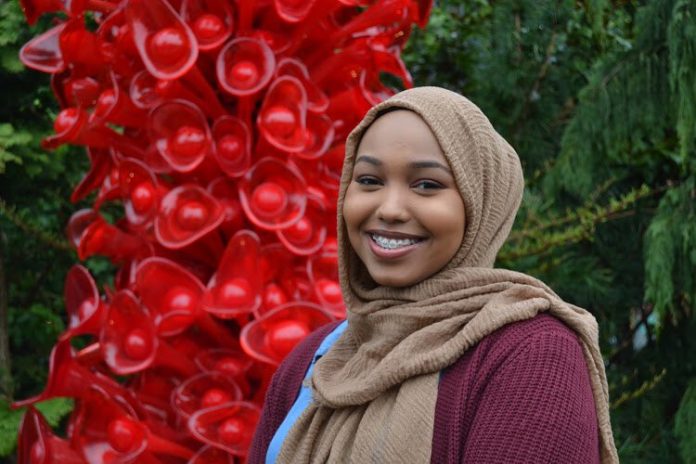 Editor’s Note: Runta News aims to highlight the stories of young Somalis who are making a difference in their community. For this Q&A interview, reporter Ahlaam Ibraahim spoke with her fellow University of Washington student Nazmah Hasaan about Hasaan’s work educating Somalis about climate change and environmental issues in Seattle. Hassan is a community liaison with the Duwamish Valley Action Team at the City of Seattle, as well as an environmental health major at UW.

Can you tell me a little about yourself and about your path to working on climate change issues?

I’m an environmental studies major at the University of Washington, and I’ve always had an interest in environmental issues. Climate change is without doubt one of the most pressing issues of our time and we need to address it. Not just as a city, but on the national and global level. I think everyone should be well versed in climate change and how to reduce our [carbon] footprints.

What is City of Seattle environmental office mission? How to do you work to connect climate change to other issues important to Seattle communities, like housing or jobs?

I think that the City of Seattle’s mission is to create a sustainable city and protect the environment. The city’s “Equity and Environment Agenda” prioritizes a holistic look at the environment. It’s not just about ecology, it’s about other things like housing or jobs too. Creating policies that are more sustainable and improve people’s quality of life is very important. For example, investing in clean and efficient public transportation not only reduces carbon emissions, but also gives people a more affordable way to get around.

What are some of the climate change and/or environmental issues facing the Somali community here in greater Seattle?

I live in and do environmental justice work in Lower Duwamish, which is disproportionately affected by local [air and water] pollution. My neighborhood and the surrounding neighborhoods are home to many low income communities of color, including Somalis. I think the biggest issue is not only pollution in these areas, but the lack of advocacy on behalf of these communities. There has been recent improvement especially with the Equity and Environment Agenda but we definitely need more organizing and inclusion around environmental issues in our community.

I work with Duwamish River Clean Up Coalition and the City’s Duwamish Valley Action Team to make sure that the needs of the Somalis in my neighborhood regarding environmental issues are addressed. I’ve been conducting community meetings since last spring. These meeting are mainly dialogue, they are the city trying to get the perspectives of the Somali community and put those perspectives into action.

One thing that stands out to me at the meeting is how receptive Somalis are to learning about environmental issues. Whether it’s climate change, or any other issue. I’ve never met a Somali climate change denier, but I have met people who don’t know much about climate change and want to know more. We need more people in our community to go into the environmental field so we can raise awareness about these issues.

Right now we have a president who has called climate change a “hoax” and is working to undo climate action made during the Obama administration. Given this, in your view what is the role of local organizing on environmental issues?

I think local organizing is important now more than ever. Seattle is one of the most progressive cities in the country and will not blindly follow the current presidential administration. With the defunding of EPA and blatant denial of climate change, there’s no doubt the next four years will be difficult. However we don’t have any other choice but to keep working on climate change issues so we can preserve our environment.

How to get involved:  A full list of upcoming Environment and Climate Change community meetings is online at:  http://www.seattle.gov/environment.

“My Halal Kitchen”, a New Cook-Book!