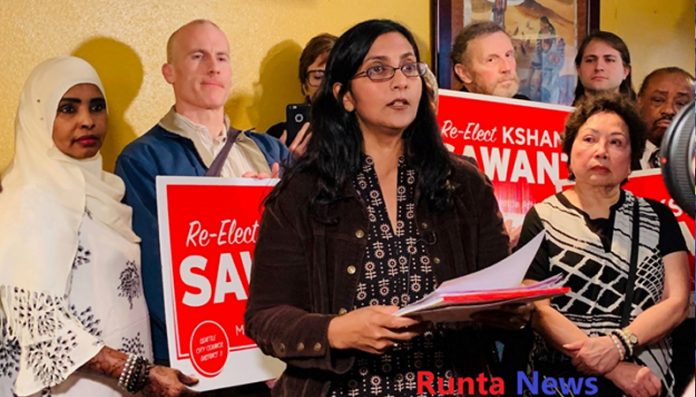 Councilmember Sawant went on to describe Amazon CEO Jeff Bezos’ bullying last year, when he threatened 7,000 jobs to try to defeat the Amazon Tax, then applied intensive backroom pressure to force its repeal a month after it was unanimously passed by the City Council. Councilmember Sawant continued, “I’ve seen firsthand the corrosive effects of corporate power and lobbyists in the back rooms of City Hall. That’s why my campaign is not for sale. As always, I don’t take a dime from corporations, CEOs, lobbyists or big developers.”

Councilmember Sawant was joined by community leaders from District 3 and around Seattle. Reverend Dr. Robert L. Jeffrey, Sr – whose congregation resides in the heart of Seattle’s Central District, said: “Racism has taken on a new character. Wealth and privilege is the new mantra. We can’t sit idly by while multi-billionaires are displacing entire communities. What we’re against is the super rich dominating society while the homeless are being left on the street, where people with middle incomes are being driven further and further out of Seattle. That’s why I’m behind Kshama and her re-election.” 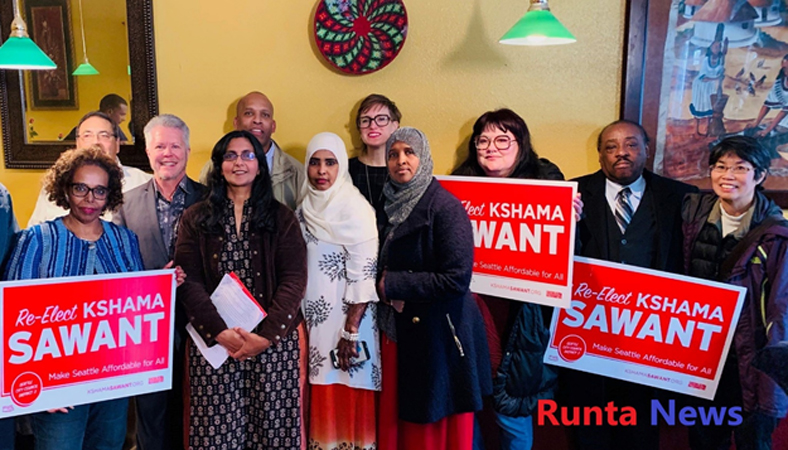 Labor leaders also joined Sawant at the press conference. David Parsons, President of UAW Local 4121 representing 5000 academic workers at the University of Washington, said: “When I first met Kshama Sawant and asked her how we can work together, I’ll never forget what she said: ‘I will be unambiguously be behind your union and your members at every turn.’ And she has fulfilled that promise – always. That is something you can say about very few people, and particularly of those in elected office.”

Shannon Morrison, lead organizer on the Indigenous People’s Day planning committee, a co-chair of CANOES for City of Seattle Native American Employees, and a member of the Tlinget tribe, said: “It’s been a personal experience to work alongside Kshama here on Duwamish land. She’s been supportive of us with replacing Columbus Day with Indigenous Peoples’ Day, fighting for $15/hr, fighting to end homelessness, to divest from Well Fargo. All these issues have had an impact on the native community.”

Ubah Warsame, who was a vocal supporter during Sawant’s successful 2015 re-election campaign, spoke about Sawant’s long track record of working alongside tenants to fight for affordable housing. At the press conference, Warsame said: “It is a must for Kshama to be in City Hall. She is the one that when we reach out, when people need her, she is there. Kshama, we’re with you, and we’re going to continue that fight together.“

Sawant made history in 2013 when she became one of the first socialists to win a major election in decades. She won re-election in 2015 by a wide margin, mobilizing over two hundred volunteers and raising a record $450,000 in grassroots donations. Though she cautioned that corporate cash would flood into this year’s election, she was confident that working people would build a powerful grassroots re-election campaign this year to defend their seat in City Hall.

Sawant added, “As a member of Socialist Alternative, I wear the badge of socialist with honor, and I’m excited to see candidates identifying as socialists like Alexandria Ocasio-Cortez winning elections across the country, and running right here in Seattle this year.”

The press conference was hosted at Saba Ethiopian Cuisine, which is under threat of being replaced by corporate development. Workie, the owner of Saba, said: “Our restaurant has been here for 20 years. Since I reached out to Kshama Sawant, the fear of being evicted was removed. Now I am not alone in the fight against gentrification!”