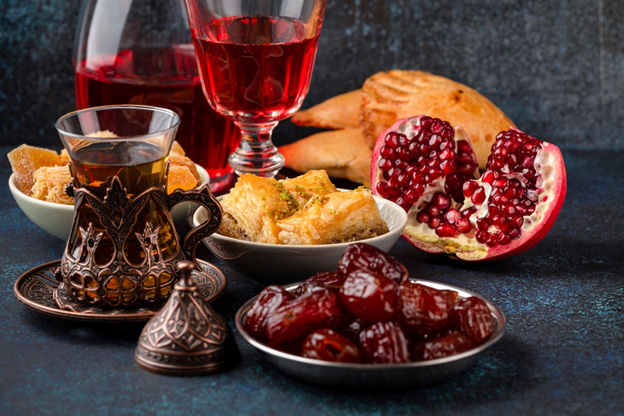 The holy month of Ramadan, which is considered the “Sultan of 11 Months” in the Islamic world, started this year on Friday, 24 April. In Turkey, social assistance and solidarity reaches its peak while many centuries-old traditions are repeated in Ramadan, which will certainly preserve this traditional spirit across all parts of the society although it will be more different than the previous years due to the special circumstances of this year.

Ramadan Traditions in Turkey from the Past to the Present

In Turkey, “iftar” tables are set to break the day-long fast throughout Ramadan, where the larger families, friends and neighbors gather around the same table at homes or similar crowded groups fill the restaurants as a feast. When we talk about Ramadan traditions, the first to come to mind are crowded iftar dinners, delicious treats, and ladies demonstrating their culinary skills. These rich dinner tables, extraordinarily adorned with a large variety of dishes, are an indicator of the Turkish hospitality and family values. The centuries-old tradition of helping the poor and those in need and having them over at the iftar dinners still continues with the hot food distributed to thousands of people by institutions, organizations and local governments.

Yet another meal eaten in the wee hours of the morning in preparation for the fast of the coming day throughout the Ramadan, and which is attended only by members of the household, the “sahur” tables feature lighter dishes unlike the other Muslim countries in the Middle East. One of the oldest traditions of the month of Ramadan, the Ramadan drummers wander from one street and neighborhood to another, informing those who fast about the approaching sahur time. This tradition, which started to make sure that nobody would miss sahur in an era when not every household had a clock, may have lost its functionality today but symbolically, it continues across the entire country. The drummers are rewarded for their month-long effort to wake up the people by collecting tips on the last night of Ramadan.

An indispensible part of Ramadan, the “Ramadan pita” is a traditional delicacy of the Turkish cuisine. Pita queues in front of bakeries, which start hours before iftar continue until almost the recital of the evening ezan, which marks the time to break the fast. Foods most frequently served on the tables include regional and traditional varieties of meat dishes, vegetable and legume dishes, soups, pilafs, date, olive and cheese varieties, Turkish pastrami and soujouk (Turkish style fermented sausages), salads, various pastries and pies made of thin sheets of dough. Usually, the fast is broken with a sip of water followed by a single olive or date and then some soup. Iftar continues with the richer dishes and then the desserts. In some households, many desserts bought from a shop as well as fruits and dried nuts are consumed during the time from iftar to sahur. Another delicacy from the Ottoman cuisine is the “Güllaç” dessert, which is named after rose (Gül in Turkish), of which water is added to the dessert, is made from very thin sheets of special dough, milk, sugar and rose water as well as crushed walnuts, which are spread between the sheets of dough in abundance. Yet another indispensible item of the iftar tables is the “Ottoman Sherbet”, which can be made easily at home as both a healthy and palatable drink. You can also try at home sherbets made from fruits such as cranberries, sour cherries, grapes, tamarinds, lemons, cloves, and liquorice as well as medicinal herbs.

How to make Ramadan Pita

To be used while shaping the dough; 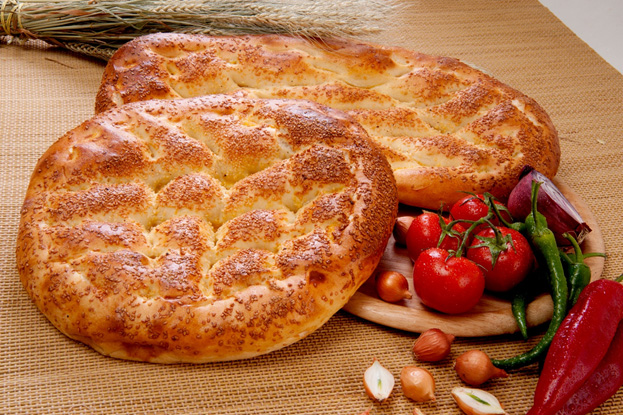 To apply on the pita:

Put the yeast, milk and sugar in a deep bowl and keep for 10 minutes (until the yeast melts). Add the remaining ingredients in order, knead the flour, and after it thickens, wait for 40 minutes after it thickens (ensure it is a soft dough that does not stick to your hand). Divide the dough into 2 or 3 pieces.

Sprinkle some flour on the surface and take some flour on your hands before spreading the dough. Give it a circular or oval shape. Place the spread out dough on a tray that is either previously oiled or lined with a baking paper. Also sprinkle some corn flour on the tray so it won’t stick. Immerse your hands in the water-flour mixture and give it a square or lozenge shape by first pressing on the edges and then on the middle. The trick is to keep on immersing your hands in the water-flour mixture so that the shapes won’t disappear during baking. The dough is left for half an hour to leaven and the same procedure is repeated on the shaped parts to make sure that they will last. Finish off by applying the sauce on and sprinkling a lot of sesame and black sesame. Bake in an oven pre-heated to 200°C until golden brown. 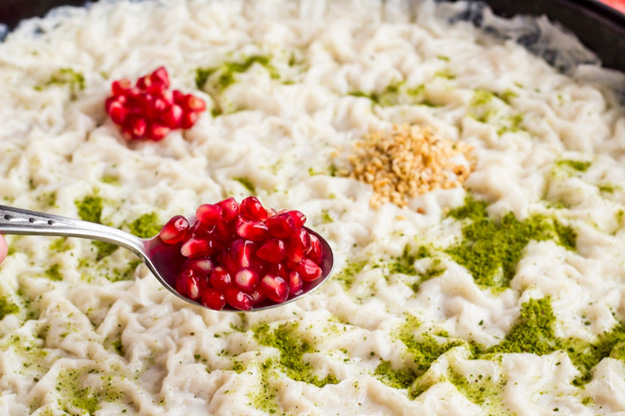 For the video of Ramadan food click here https://www.youtube.com/watch?v=n7sd2kVT5Gc&feature=youtu.be

Located in the Mediterranean and connecting Asia and Europe continents that are separated by famous Bosphorus, Turkey is a unique destination that welcomed last year about 40 million tourists. The country that has always been a hub for cultural interaction and home to varying climates inspires the visitors today with its history, nature and gastronomy that reflect the diversity of civilizations for centuries. Located at the crossroads of cultures, Turkey has a distinctive understanding of art & fashion which is the synthesis of tradition and modernity and its extremely dynamic shopping & entertainment life also attracts the visitors from all over the world.