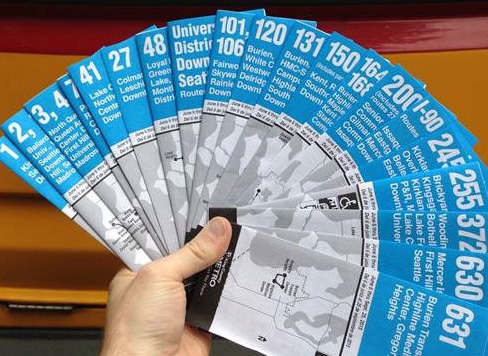 Starting Saturday, June 6, better, more reliable King County Metro bus service will hit the streets. Riders can preview online how service will change on their route or by picking up a printed orange Rider Alert brochure.

New blue timetables also are available on buses and at Metro customer service offices. Detailed route revisions are posted online in button format and list format. Electronic schedules will be posted online Friday, June 5. Until then, using a travel date of June 6 or later, riders can plan trips online in order to preview updated schedule information.

“We are adding transit service our customers have needed for some time as the region’s economy has grown and we’ve experienced record ridership,” said Metro Transit General Manager Kevin Desmond. “More is needed and we will continue to deliver with this round and future rounds of improvements.”

The changes are part of King County Metro’s regular June service change and include expanded transit service under a new contract with the city of Seattle. Also starting June 8 are new community shuttles created to better serve Burien and Mercer Island, and general schedule improvements and long-term service revisions during major construction projects.

Bus service totaling 110,000 hours funded by the City of Seattle’s Proposition 1 approved by voters last November is planned to be added in 53 routes in the city, followed by another 113,000 hours in September. Through Executive Constantine’s Community Mobility Contract with the City of Seattle, riders will enjoy added bus trips on routes throughout the city that will begin to address overcrowding and reliability challenges that have been building in recent years, due to record levels of ridership and the region’s growing economy.

Further service improvements are on the horizon as the transit network grows and more people realize there’s a better, cheaper way to travel than driving alone.

Seattle’s Prop 1 also includes provisions to support lower-income families, including a $20 rebate of the Vehicle Licensing Fee and funding to support the ORCA Lift reduced fare.

As part of Metro’s Alternative Services Program, created by County Executive Dow Constantine and expanded by the County Council, Metro is teaming up with the city of Burien to launch a new shuttle that restores weekday local service from the Burien Transit Center to destinations such as Gregory Heights and Seahurst.

The new Burien Community Shuttle Route 631 replaces service in the area previously served by Route 139, but was canceled last September due to low ridership. With this demonstration service, riders will experience a new customized benefit – a flexible area where riders can call ahead to schedule off-route service.

Also under the Alternative Services program, a new Route 630 shuttle debuts June 8 to make commuting to work between Mercer Island and First Hill/downtown Seattle easier and more convenient. The shuttle is the product of an innovative partnership between Metro Transit, Mercer Island and the city of Seattle to fund a two-year demonstration to help offset the loss of commuter transit service canceled last fall due to low ridership. The shuttle will operate weekday peak-only service between Southeast 46thStreet/Island Crest Way and downtown Seattle via First Hill, provides a new flexible service area for residents on the east side of the island, and includes a key connection to the Mercer Island Park-and-Ride.

During city of Seattle construction on 23rd Avenue, there will be temporary revisions to Metro routes 4, 8 and 48 in the Judkins Park area for about eight months. Route 4 will travel south of East Jefferson Street only on weekends; Routes 8 and 48 will shift to Martin Luther King Jr Way south of Cherry Street to avoid construction. Route 8 will not operate on South Jackson Street, 23rd Avenue and East Yesler Way for about eight months and instead will serve temporary stops on MLK Jr. Way.

Other service and schedule adjustments