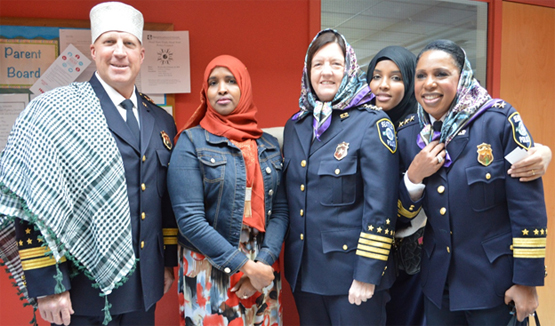 indicating that the Seattle Police Department’s (SPD) performance with communities of color has improved over the last year, with fewer people reporting problems with their interactions with SPD and more residents feeling that SPD is keeping them safe.

(the Photo) From left, Assistance Chief Merner, Ubah Warsame, Chief O’Toole, Amal Abdullahi, and Deputy Chief Carmen Best during their meeting with the Somali/Muslim community earlier this year to assure that Seattle is safe for all communities

“The report commissioned by the federal monitoring team underscores the progress being made by the Seattle Police Department in addressing the gulf that exists between officers and the communities they serve,” said Mayor Murray. “And we continue to work to repair the trust with our police department. Earlier this month, we sent the strongest police accountability proposal in Seattle’s history to the federal judge for review. Once we hear from Judge Robart, we will send a final reform package, which will include permanent and meaningful civilian oversight, to the City Council for their input and approval.”

In August of this year, Judge Robart issued an order ruling that any SPD reform package must be reviewed by the Court before being sent to City Council to ensure the package meets the accountability and transparency requirements agreed to under the 2012 Consent Decree settlement with the DOJ.

The poll, which was commissioned by the DOJ’s monitoring team, surveyed a random sampling of 700 Seattle residents over the age of 18, with additional interviews of Latino and African American residents. The overall results show that SPD’s performance rating has climbed from 60% in 2013 to 72% in 2016. The full report, along with methodology, can be found Download Most Recent Classifieds.

CELEBRATE THE END OF RAMADAN AT THE SEATTLE PUBLIC LIBRARY