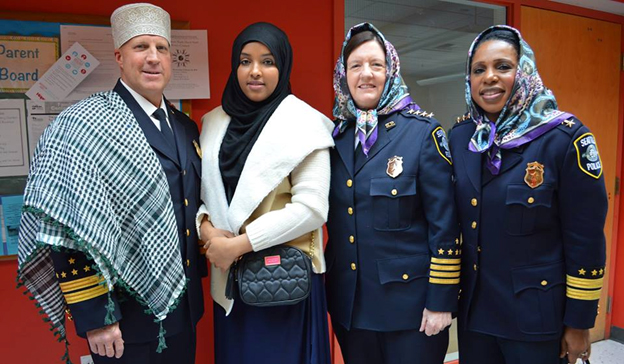 Seattle Police Chiefs have met the Muslim Community to assure them Safety. From left, Assistant Chief Robert Merner, Amal Abdullahi, Chief Kathleen O’Toole, and Deputy Chief Carmen Best. File photo by Mohamud Yussuf of Runta News
(SEATTLE, WA, 10/28/2017) – The Washington state chapter of the Council on American-Islamic Relations (CAIR-Washington) said it is working with Kent School District administrators and impacted families to help ensure a proper response to threatening anti-Muslim vandalism and slurs found on the Kent-Meridian High School campus this week.
According to a letter sent out by the school on Friday, October 27, a staff member reported graffiti in the girl’s bathroom on Tuesday, October 24th that “threatened students of Muslim heritage.” Photos of the graffiti show threats that include “All Muslims dead on 10/30 #MAGA,” towel heads at KM are gonna DIE, “f**k Muslims,” and a Nazi swastika sign, as well as other slurs.
The letter goes on to say that the school is working with Kent Police and that the school “will implement extensive security measures on October 30th to help us maintain a safe campus.”
CAIR-WA has been in touch with Kent-Meridian, Kent School District, and with impacted community members, and plans to meet with school officials next week to ensure a full and appropriate response to the incident. The civil rights organization will take that opportunity to discuss how the school should approach such issues moving forward to ensure Muslim students and parents feel safe at school and encouraged to report discrimination, bullying and threats.
“This is not the first case reported to us of anti-Muslim vandalism at a school, college or university. The fear of being bullied at school has increased for Muslim students due to the negative effects of the presidential campaign and election,” said Civil Rights Director Jasmin Samy. “Our community must report any case of bullying, harassment or intimidation in schools so our learning environments can be a safe place for all students.” 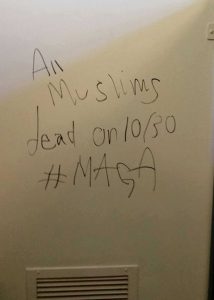 Earlier in September, the Ahmadiyya Muslim Community Seattle chapter hosted the Muslims for Life blood drive to honor the nearly 3000 victims of the 9/11 terrorist attacks. Days later the same community have arrived at the mosque to find it vandalized with offensive graffiti. The management have responded to the attack with an invitation to peace and dialogue. A statement issued by the management said, “The past two years have seen an unprecedented spike in anti-Muslim hate crimes, mosque vandalisms, and mosque attacks. We invite your participation in this peace building endeavor as a show of solidarity, friendship, and unity against intolerance and hate”.
Runta is advising Muslims in Seattle area to be vigilant and report to any suspicious activities to the law enforce agencies including Seattle police whose chiefs have shown solidarity with our community. Washington State must remain hate free zone as it established itself to be known for such soon after 911 event of 2001.