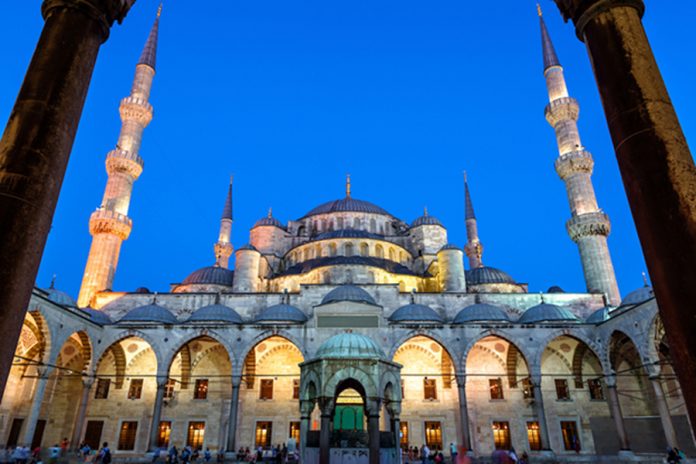 This year, too, İstanbul mosques will continue the four centuries old “Mahya” tradition throughout the month of Ramadan as well as the Ramadan Holiday that immediately follows it. In Turkey, text lights, or “Mahya”, are hung between two minarets in the holy month of Ramadan as well as the religious holidays. “Mahya” tradition first appeared during the reign of the Ottoman Sultan Ahmed I. Legend has it that one of the most important calligraphers of the time, Hafız Kefevî, who was also the muezzin of the Fatih Mosque, gave as a present a very finely made plaque to Sultan Ahmed I. The sultan loved the plaque and wanted it to be illuminated and hung at the Blue Mosque, which had been commissioned by him. The plaque was illuminated using oil lamps, which marked the creation of the first mahya. Over time, this practice turned into a tradition as it spread to other mosques and then to other Ottoman cities, while the original oil lamps were eventually replaced by light bulbs and LED lights as technology advanced. Today, mahya lights are turned on every night before the start of the Tarawih Prayer and remain on until the beginning of the Morning Prayer.

Blue Mosque – A foremost example of Classical Turkish Art, the Blue Mosque is the only mosque that incorporated six minarets in its original design. Sultan Ahmed I Mosque is the actual name of the structure, which attained its moniker for its blue İznik tiles. Built in 1609-1616, the architect Sedefkar Mehmet Ağa meticulously decorated the interior with more than 20,000 breathtaking İznik tiles that adorn the walls of the balconies that surround it on three sides. 260 windows illuminate the space, which is covered by a dome 23.5m in diameter and 43m in height. 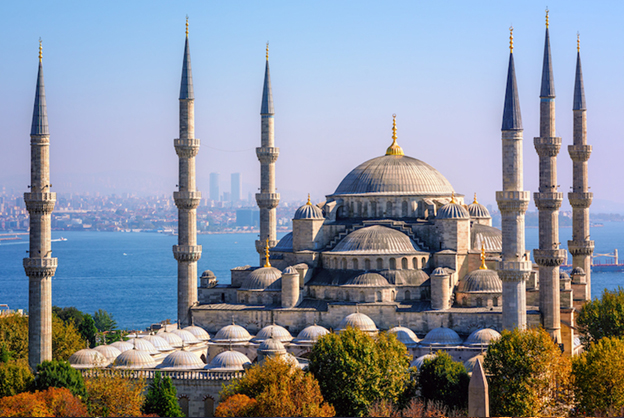 Süleymaniye Mosque – This complex was commissioned by Sultan Süleyman I, or Suleiman the Magnificent as he is known to the rest of the world, and built in 1551-1558 by the world-renowned architect Sinan. One of the most important examples of the Classical Ottoman Architecture, the Süleymaniye Mosque is a wonder of aesthetics with its ornaments and decorations. The dome of the mosque is 53m high, surrounded by four 75m-high minarets, each with 3 balconies. The tomb in front of the mihrab belongs to Suleyman I, who paid for the construction out of his own pocket, while the tomb next to it belongs to his wife Hürrem Sultan.

Rüstem Pasha Mosque – Situated in Hasırcılar Çarşısı (Strawmat Weavers Market) in Eminönü, the mosque was commissioned in 1561 to Sinan the Architect by the Grand Vizier Rüstem Pasha. The mosque is built on a complex of 16 stores, the income of which financially support it, while the rectangular main venue is covered by a large and high dome that rests on eight pillars including four freestanding columns and another four adjoined to the wall. A simple and artless structure from the outside, the Rüstem Pasha Mosque features the finest examples of the Ottoman tiles with their colors and motifs, covering everything from the portico courtyard to the interior.

Eyüp Sultan Mosque – The first mosque with a dome commissioned by an Ottoman sultan in İstanbul, Eyüp Sultan Mosque was commissioned by Sultan Mehmet II (the Conqueror) after his conquest of the city in 1453 and was completed in 1458, after which it hosted the coronation ceremonies of the Ottoman Sultans. Eyüp Sultan Mosque has a rectangular plan and a projecting mihrab. The central dome stands on arches that rest on six pillars and two elephant feet, surrounded by semi-domes. At the heart of the complex is the tomb of Abu Ayub al-Ansari, the standard bearer and close friend of Prophet Mohammad who died during the first Arab siege of the city, a fountain at the feet of his sarcophagus as well as a centuries-old sycamore tree at the center of the courtyard. After 1458, the mosque’s minarets were repaired several times before being upgraded with new, longer minarets in 1733, which then underwent several renovations in line with the original plan for centuries.

Fatih Mosque – Fatih Mosque was built in 1463-1470 by the chief architect of the time, Sinânüddin Yusuf bin Abdullah, on one of the hills in İstanbul carefully selected by Sultan Mehmet II. When it was first built, two minarets with one balcony each stood where its current minarets are located, but the mosque sustained considerable damage in the 1766 earthquake and underwent renovation in 1767-1771. 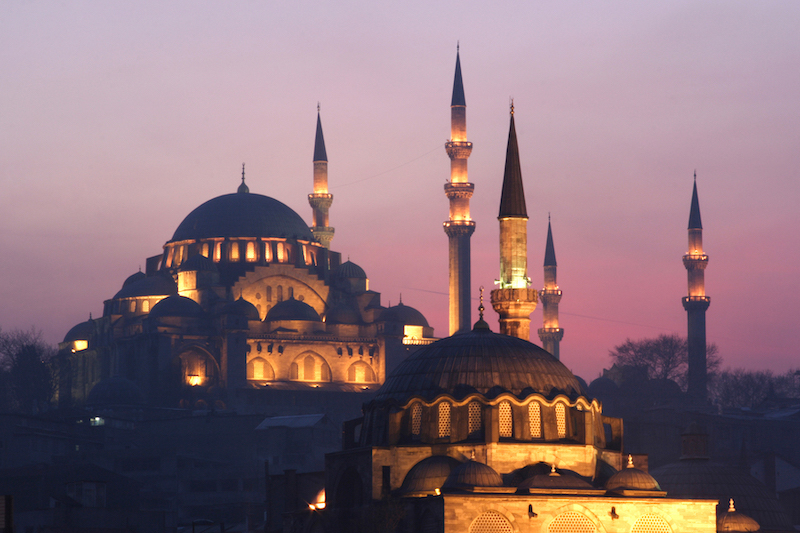 Located in the Mediterranean and connecting Asia and Europe continents that are separated by famous Bosphorus, Turkey is a unique destination that welcomed last year about 40 million tourists. The country that has always been a hub for cultural interaction and home to varying climates inspires the visitors today with its history, nature and gastronomy that reflect the diversity of civilizations for centuries. Located at the crossroads of cultures, Turkey has a distinctive understanding of art & fashion which is the synthesis of tradition and modernity and its extremely dynamic shopping & entertainment life also attracts the visitors from all over the world.

For more about Turkey please visit

By Zeynep Guldiken of TGA

Ministry of Culture and Tourism