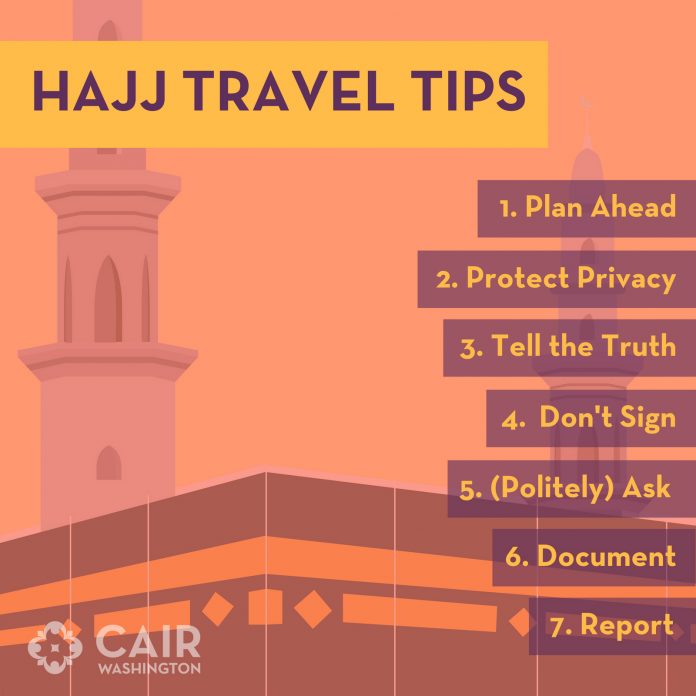 Runta News (Seattle, WA, 8/20/2018) – The Council on American-Islamic Relations of Washington State (CAIR-WA) has launched a social media campaign offering tips to travelers returning from Hajj. The campaign is a series of graphics explaining the rights of travelers whom CAIR worries may encounter trouble at airports due to the Muslim Ban and religious profiling.

“Profiling of Muslim travelers is not only unlawful, it is part of a larger campaign to intimidate and harass American Muslims,” said CAIR-WA civil rights attorney, Amanda Misasi explaining that some of her clients experience regular harassment and delays when traveling. “Americans have a right to live and move about freely without being targeted and persecuted by the government because of their faith.”

Hajj is an annual pilgrimage to Mecca in Saudi Arabia that begins this week. Over two million Muslims perform the pilgrimage annually and many American Muslims air travel every year to join the pilgrimage, which is one of the five tenants of Islam.

CAIR-WA recently joined a nationwide lawsuit challenging the federal government’s “Watchlist Program.” Victims of the watchlist are often denied the ability to travel by air, are subjected to interrogations, have their electronics seized, and have their bank accounts closed.

CAIR-WA is a chapter of America’s largest Muslim civil liberties and advocacy organization. Its mission is to enhance understanding of Islam, protect civil rights, promote justice, and empower American Muslims.