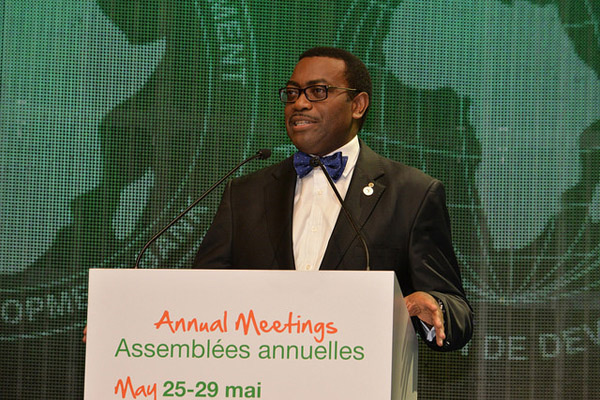 Abidjan, Côte d’Ivoire, May 29, 2017 – The future of Africa’s youth does not lie in migration to Europe, but in a prosperous Africa, the President of the African Development Bank (AfDB), Akinwumi Adesina, has said.

Adesina, who spoke at the G7 Summit in Taormina, Italy, at the weekend, stressed the need for African countries to create greater economic opportunities for its youth to stay home and live a meaningful life.  “We must turn rural areas from zones of economic misery to zones of economic prosperity. This requires new agricultural innovations and transforming agriculture into a sector for creating wealth. We must make agriculture a really cool choice for young people. The future millionaires and billionaires of Africa will come initially from agriculture,” Adesina said. The G7 nations – Canada, France, Germany, Italy, Japan, the United Kingdom and the United States – used the opportunity of the Summit to draw attention to the need for more investment in Africa to check the massive transit of its youth through the Mediterranean.  The AfDB Chief stressed the need for a more prosperous Africa and its role in keeping young people productive and engaged. “Even insects migrate from where it is dark to where there is light,” Adesina said. “No wonder Africa’s youth – our assets – take huge risks migrating to Europe, looking for a better life.”  According to Adesina, by 2050, Africa will have the same population as India and China’s combined populations today. Consumer spending in Africa is projected to reach US $1.4 trillion in the next three years and business-to-business spending to reach $3.5 trillion in the next eight years. “And Africa is reforming, making itself open for business: it accounted for 30% of global business and regulatory reforms in 2016.” He called on the G7 to think seriously about Africa as a huge investment opportunity. He announced that AfDB and its partners would launch the Africa Investment Forum next year as a deliberate strategy to attract massive private investments to the continent.  “So, Africa’s huge investment opportunities and innovations beckon you – from agriculture and agribusiness, to energy, health, ICT, infrastructure and financial services. And the African Development Bank will be there to help advance private-sector investments from G7 countries in Africa. Together with the G7, let’s innovate. Let’s give Africa a High 5,” he said.  Read the full speech: http://bit.ly/2qzluoL