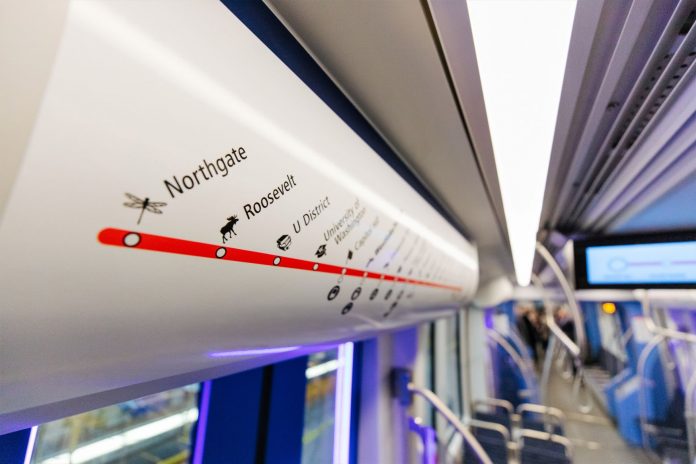 The first of 152 new light rail vehicles have arrived at Sound Transit’s Link Operations and Maintenance Facility in Seattle, an important step in meeting the needs of an expanding rail network that is expected to see ridership boom.

The new vehicles are manufactured by Siemens Industry, Inc. in Sacramento, CA and will more than triple Sound Transit’s current fleet size of 62 LRVs in service. The new vehicles will feature several improvements in onboard systems and passenger experience over the current Kinkisharyo-built fleet.

Each of the new vehicles will provide 74 seats, with larger windows, a wider center-car aisle, more seats with space to stow luggage, and four bicycle hooks—twice as many as provided currently. Each car will come equipped with dynamic passenger information displays and LED lighting improvements.

“The new vehicles are a reminder that we’re about to enter a period of major system expansion,” said Redmond Mayor and Sound Transit Board Chair John Marchione. “Between 2021 and 2024, Link will grow from 22 miles of light rail lines to more than 50 miles, allowing people an option to get to their destinations without sitting in traffic congestion.”

“The new vehicles are critical to meet ridership demand as we move forward aggressively in building our light rail network,” said Sound Transit CEO Peter Rogoff. “These new cars will become backbone of the fleet serving Northgate, Lynnwood, Federal Way, Bellevue and Redmond in the next five years.”

The arrival of the first Siemens vehicle marks the start of regular delivery of between one and three vehicles per month through 2024. The new cars will undergo extensive testing and commissioning before entering revenue service. The first of the new cars is expected to enter service early next year.

Forty new vehicles are required to serve the Northgate Link Extension when it opens in 2021. In addition to Northgate, Link service will open to Bellevue in 2023, and to Lynnwood, Federal Way and downtown Redmond in 2024.

Video of the production of the light rail vehicles is available at https://vimeo.com/342776056.

Video of the unwrapping of the new car upon its arrival is available at https://vimeo.com/343103163