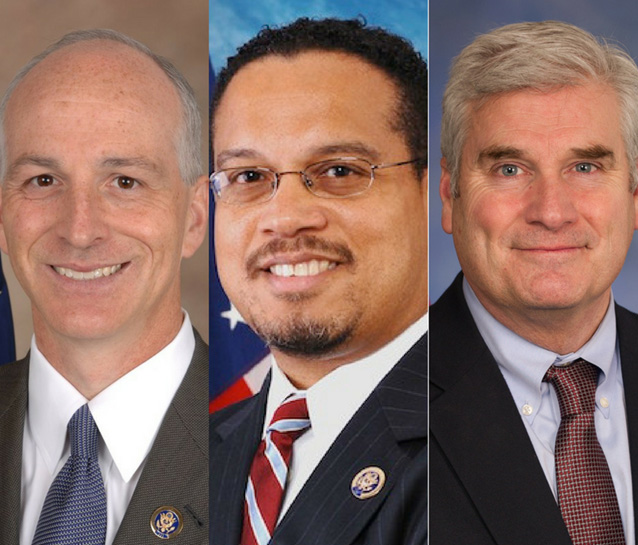 From left-Congressman Smith, along with Congressman Keith Ellison and Congressman Tom Emmer who were major sponsors of the resolution.
Washington, D.C. – On the one-month anniversary of the October 14th terror attack on Mogadishu, Rep. Adam Smith (D-WA) joined Rep. Keith Ellison (D-MN) and Rep. Tom Emmer (R-MN), along with Reps. Steve Stivers (R-OH), Karen Bass (D-CA), Joyce Beatty (D-OH), Erik Paulsen (R-MN), Ruben Gallego (D-AZ), and Denny Heck (D-WA) in introducing House Resolution 620 condemning the attack that killed more than 350 people, including three American citizens, and injured another 200—making it the single deadliest in Somalia’s history.
“It’s been a month since the terrible and cowardly attack on Mogadishu, and my heart still breaks for the people of Somalia and their families and friends here in the United States,” Congressman Ellison said. “The people of Somalia have shown incredible resilience— coming together not only as part of an inspiring effort to recover from this attack, but also to rebuild their nation in the spirit of peace and prosperity. I am proud to stand with my colleagues to express solidarity with the people of Somalia by strongly condemning the senseless violence, extending our condolences to all those affected by the attack, and reaffirming continued U.S. support for Somalia.” 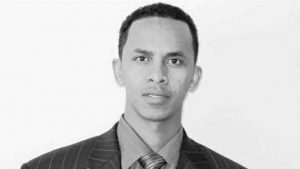 Mohamoud Elmi aka Obama is one of those Somali Americans killed in the attack and mentioned in their resolution. He lived in Ohio before he joined the government of Somalia to serve his country of origin.
“Just over one month ago, Mogadishu was the site of a horrific and cowardly bombing that claimed the lives of hundreds of innocent civilians. In response, said Congressman Adam Smith, I have joined with my colleagues on a resolution condemning this tragedy, expressing sympathy for the victims and their families, and reaffirming our support for the nation of Somalia,” Congressman Smith said. “Together with our international partners, the United States must redouble our commitment to help the Somali people rebuild after this horrific tragedy. I continue to stand in solidarity with the Somali community in my district and around the world in support of efforts to ensure peace, security, and prosperity for the Somali people.”
The full text of the resolution reads as follows:
“Strongly condemning the terrorist attack in Mogadishu, Somalia on October 14, 2017, and expressing condolences and sympathies to the victims of the attack and their families.
Whereas on October 14, 2017, a truck bomb filled with military grade and homemade explosives detonated at a busy intersection in the center of Mogadishu, Somalia, and took the lives of more than 350 people and injured more than 200 additional people;
Whereas at least three Americans, Ahmed AbdiKarin Eyow, Mohamoud Elmi, and Abukar Dahie, were killed in the attack;
Whereas the Somali Government believes that Al-Shabaab was responsible for the attack, although no official claims of responsibility have yet been made;
Whereas Al-Shabaab has previously avoided claiming responsibility for Al Shabaab operations when it believes the operation may significantly damage its public image among Somalis;
Whereas the Department of State condemned ‘‘in the strongest terms the terrorist attacks that killed and injured hundreds in Mogadishu on October 14’’;
Whereas the Department of State stated that ‘‘the United States will continue to stand with the Somali government, its people, and our international allies to combat terrorism and support their efforts to achieve peace, security, and prosperity’’;
Whereas according to the Department of State’s Country Report on Terrorism for 2016, Al-Shabaab is the most potent threat to regional stability in East Africa;
Whereas the United States continues to support counterterrorism efforts in coordination with the Government of Somalia, international partners, and the African Union Mission in Somalia (AMISOM) mainly through capacity building programs, advise and assist missions, and intelligence support;
Whereas Somalia’s president, Mohamed Abdullahi Mohamed, declared three days of national mourning in response to the attack;
Whereas the vibrant, bustling district of Mogadishu where the attack occurred is characteristic of the city’s revitalization, and the solidarity and efforts by the city’s residents to rebuild already are a testament to their resilience; and
Whereas Somalia has been a strong partner to the United States: Now, therefore, be it
Resolved, That the House of Representatives—
(1) strongly condemns the terrorist attack in Mogadishu, Somalia on October 14, 2017;
(2) expresses its heartfelt condolences and deepest sympathies for the victims of the attack and their families;
(3) honors the memories of Ahmed AbdiKarin Eyow, Mohamoud Elmi, and Abukar Dahie, who were murdered in the horrific terrorist attack;
(4) recognizes the significant efforts to combat terrorism by the Government of Somalia, the countries contributing troops to the African Union Mission in Somalia, and United States forces in Somalia;
(5) reaffirms United States support for the Government of Somalia’s efforts to achieve peace, security, and prosperity and combat terrorism in Somalia; and
(6) renews the solidarity of the people and Government of the United States with the people and Government of Somalia.”
Note: Sorry the delay to publish the resolution a week later for technical reasons. We received it on November 15, just exact a day after a full month of the attack which was October 14.