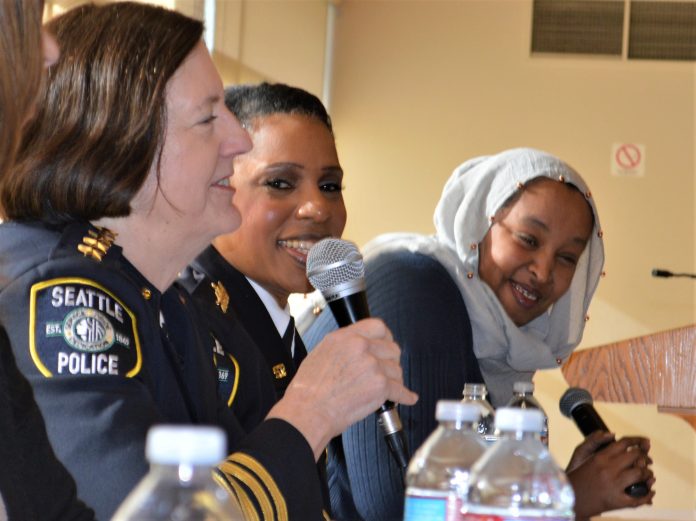 Carmen Best in the middle with her always a big smile. To her left is Asha Mohamed who is a member of the Somali/East African community in Seattle and to her right the former Seattle Police Chief Kathleen O’Toole at an event sponsored by Runta News at New Holly Gathering Hall. (File photo by Mohamud Yussuf 2016)

Seattle Police Chief Carmen Best finally decides to quit her job after facing tough challenges from the public, City of Seattle officials, and the Council Chamber. The news of her resignation was first broken by KIRO radio’s Dori Monson on Monday night on air and on Twitter by Q13 reporter Brandi Kruse.

“This was a difficult decision for me, but when it’s time, it’s time,” Best wrote in a Monday night message to Police Department employees. In her message to “the Women and Men of the Seattle Police Department,” Best wrote she would be retiring, effective Sept. 2. She said news reports had raced ahead of her. “I wanted you to hear this from me,” wrote Best, the first Black woman to lead the department. “But some media have reached this conclusion on their own.”

Carmen Best who herself is a black woman has been a strong advocate for a reform in the wake of George Floyd’s death. Some of her supporters saw her as an agent of change while her opponents view her as part of the problem. She had lately been under immense stress as Seattle City Council members have been working hard to slash in half her departments’ budget including huge cut on her salary.

The East African community will miss a great friend who have always been part of their network. We wish Chief Best who is a passionate human being for a bright future and continue her advocacy for communities of color.

Some parts of this report come from today’s Seattle Times Newspaper which Runta News has a collaborative work relationship.

Do You Qualify for Accessible Child Care Funding?