Abidjan, Côte d’Ivoire, 2017 – The African Development Bank (AfDB) will invest US $24 billion dollars in agriculture as part of its Feed Africa programme- a strategy for agricultural development in Africa. President of the Bank, Akinwumi Adesina, said this in a speech he delivered at the 50th anniversary celebration of the International Institute for Tropical Agriculture (IITA) in Ibadan, Nigeria, Adesina emphasized that the goal of the Bank is to “ensure that Africa feeds itself within ten years, and unlocks the full potential of its agriculture.”
The IITA hosted a series of events to celebrate 50 years of excellence in research. Dignitaries attended the event from across the continent. The Institute recognized Adesina’s immense contributions to improving agriculture and named a newly constructed building after him. The US $700,000 Akinwumi Adesina Youth Agripreneurs Building is a new Training Facility for Capacity Development for Youth Agripreneurs funded by the Federal Ministry of Agriculture and Rural Development and IITA. The training facility comprises two major training rooms that can conveniently accommodate 50 trainees each, two big offices for 30 interns each, and 20 standard sized offices. “I am humbled, and deeply appreciative of the opportunity to lend my name to this well-equipped building which will be used by young Agripreneurs to learn, set up and launch their own businesses, and create a prosperous living for themselves, their families and those they will employ,” Adesina said. 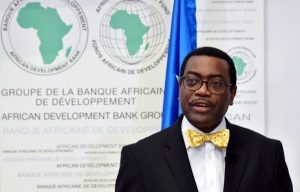 Adesina re-affirmed his conviction that the future millionaires and billionaires of Africa will emerge from the agriculture sector. “Africa is today spending $35 billion a year importing food. That is US$35 billion that should be kept on the continent. This is a US$35 billion market that young people can tap into to create new wealth each year. To do that requires totally changing the lenses with which we look at agriculture. Agriculture should no longer be seen as a way of life or a development sector, but rather as a business for wealth creation,” he emphasized.

Isha Sesay Guest Editor of the BBC’s Focus on Africa