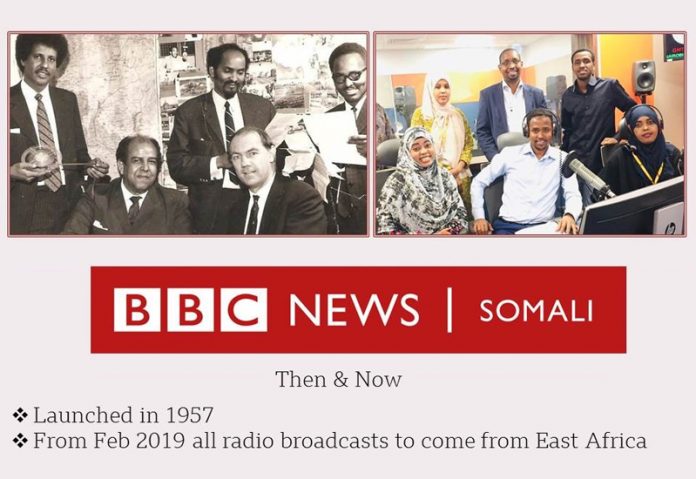 For the first time in over 60 years of broadcasting BBC News Somali’s radio programmes will now all be recorded and transmitted in East Africa. Starting from Mon 18th Feb, listeners can hear daily news bulletins from the recently launched BBC East African bureau in Nairobi. To celebrate this change there will be special programming all week including:

Abdullahi Abdi, Editor of BBC News Somali says: “I have never been this proud to have led a team of veteran journalists – who have been very helpful to the new generation. This move gives us an opportunity not only to get closer to the majority of our audiences in the horn of Africa, but also to tell people’s stories, aspirations and dreams.  We want to tell the story of Somali life to Africa and the rest of the world.”

BBC News Somali launched in 1957 and has been broadcasting for over 60 years and reaches a weekly audience of around 3.6million people in East Africa, the Horn of Africa and around the world – with its radio, online and TV content and via Twitter, Facebook and Instagram. BBC news Somali is the most listened to international radio in Somalia and has one of the biggest Somali Facebook pages with over 1.1million followers.

Abdinur Sheikh Mohamed, Journalist for BBC News Somali for the last two decades: “When we were starting in the late 80s and early 90s, many people doubted that we would be as prominent and as eloquent as the old journalists who were then paving the way for us. Today, we are considered the foundation for BBC News Somali. I am therefore confident that this new generation of journalists will be the future stars of the BBC and journalism for the Somali speaking people.”

“It has always been my dream to join the BBC, and I have suddenly discovered that we have the opportunity of stepping in the shoes of people like Abdinur Sheikh Mohamed, who are household names. However, I am confident that we will conquer new territories in story-telling in such a way that will please all our listeners, with specific focus on women and youth.”